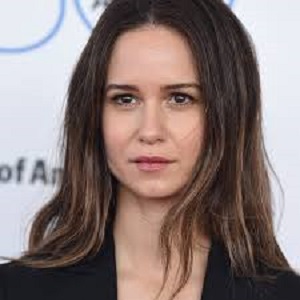 “My first memory of the Harry Potter series was my little brother just falling into those books and not resurfacing until he was done. That J.K. Rowling got an entire generation reading is extraordinary - I'm amazed, thrilled, and proud to now be portraying one of that phenomenal writer's characters.”

Katherine Waterston is single at the moment

She has not been linked to any other person to date. She is currently busy in her career.

However, she is pregnant and the question regarding the father of her child is still unknown according to the sources like daily mail. Hope she will be revealed her partner soon.

Who is Katherine Waterston?

Katherine Waterston is an English-born American actress and she is well known for her performance in ‘Inherent Vice’ in 2014, ‘Fantastic Beasts and Where to Find Them’ in 2016, and ‘Alien: Covenant’ in 2017.

She was born on March 3, 1980, in Westminster, London, England, UK. Her birth name is Katherine Boyer Waterson and she is currently 42 years old.

She was raised in Connecticut.

Her father belongs to English and Scottish descent.

Katherine’s brother is a director whose name is Graham Waterston and her sister is actress Elisabeth Waterston. She has also a half-brother named James Waterston (actor).

Katherine holds American citizenship and her ethnicity is a mix of English and Scottish.

She attended the Loomis Chaffee School and graduated from there in 1998. She completed her BFA in Acting at Tisch School of the Arts at New York University.

Katherine appeared on a stage during her initial career. She appeared in ‘Smashing’ in 2003 and later as Aurdey in ‘Los Angeles’ in 2007.

She debuted her television role in the pilot ‘Americana’ in 2004 and appeared as Emma Harrow’ in 5 episodes of ‘Boardwalk Empire’ from 2012 to 2013.

She has an estimated net worth of around $1.5 million as of 2022, and she earned that sum of money from her acting career.

Katherine surprised her fans when she revealed her pregnancy at the London premiere of ‘Fantastic Beasts: The Crimes of Grindelwald’.

She smiled at the camera by placing her hand on her baby bump. But, she has not revealed any information about the child’s father.

She has a height of 5 ft. 12 inches and she weighs 60 kg. Katherine has got light brown hair and dark brown eyes. Her body measurement is 34-24-33 inches.