Kathleen Wilhoite is renowned as an actress, musician, singer, and songwriter. She is married to musician David Harte

Kathleen Wilhoite is living a blissful conjugal life. She is married to musician David Harte. The couple married on February 21, 1997. Together, the couple has two children a son named Jimmy-Ray Harte (b.1995) and a daughter named Ruby Harte.

The duo has also adopted a son named Adu from Ethiopia in the early 2010s. 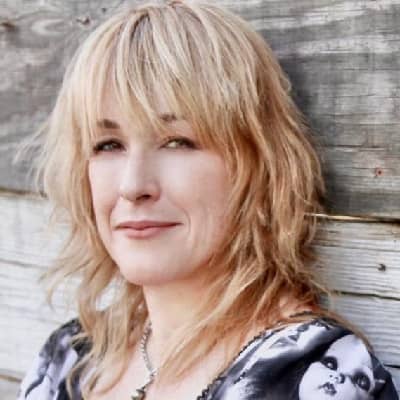 Who is Kathleen Wilhoite?

Kathleen Wilhoite is renowned as an actress, musician, singer, and songwriter from the United States. She is best known for her prominent role as Arabella McGee in the American 1986 thriller film ‘Murphy’s Law’.

Recently, she appeared in Justine Bateman‘s directorial debut film Violet in the role of Waitress (Jones).

Kathleen was born on June 29, 1964, in Santa Barbara, California, U.S. At present, she is 57 years old and her Zodiac sign is Cancer. She holds American citizenship whereas her ethnicity is unknown.

The identity of her parents and family members are under the curtains. She hasn’t yet disclosed it in the media. Wilhoite attended the University of Southern California. After graduation, she studied acting at the Lee Strasberg Institute in Los Angeles.

Kathleen made her acting debut through Private School in 1983 as Betsy. The same year, she appeared in a TV film, Quarterback Princess as Carolyn.

In 1984, she constantly appeared in four TV films such as AfterMASH, Family Ties, Flight 90: Disaster on the Potomac, and Single Bars, Single Women.

Wilhoite was cast opposite Charles Bronson in the 1986 neo-noir action thriller film, Murphy’s Law. She also starred in the film The Morning After as Red and Sarah ‘Zarabeth’ Crawford as Witchboard.

She played in two theatrical productions for New York City’s Second Stage in 1987 Division Street and Moonchildren. Wilhoite has also provided the voice of the titular character of the Disney Channel animated series Pepper Ann from 1997 until 2000.

Apart from acting, she is passionate about music and released two albums Pitch Like a Girl (1997) and Shiva (2000).

Kathleen has managed to maintain a clean profile to date. She hasn’t been part of any sorts of rumors and controversy that create a huge buzz in the media.

As of 2021, Kathleen’s net worth is estimated to be around $3 million throughout her successful career as an actor, musician, and singer. Further, her salary and other earning are still under review.

Kathleen is 5 feet 5 inches tall and her weight is about 53 kg. Her waist and hips sizes are 23 and 35 inches. Likely, her bra size is 34B and she wears 6 (US) dress sizes. She has brown pair of eyes and her right eye is blue-green and her left eye is brown which is called heterochromia iridis.