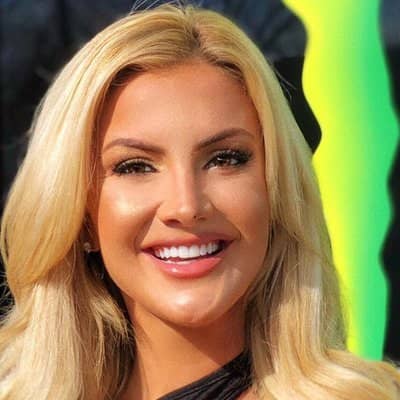 Kathryn Dunn is currently dating a TV blogger, Steve Carbone. He is better known as ‘Reality Steve’. The couple started dating in April 2020.

They keep secretive about their relationship until Steve revealed it through his Instagram Live on 8th June 2020. Presently, the couple seems to be happy and enjoying their love life blissfully.

Before joining the Big Brother season 21 in 2019, Dunn has a romantic relationship with Marty Martinez. After that, she hooked up with Big Brother contestant, Jackson Michie, Holly Allen, and Nick Maccarone.

Also, Dunn often posted the photos with Nick on her Instagram after the end of Big Brother. However, the pair separated in early April 2020.

Who is Kathryn Dunn?

Kathryn Dunn is an American reality TV personality, Beauty Pageant holder, Journalist, and former NBA Dancer. She is renowned for appearing in the 21st season of  Big Brother.

Kathryn Dunn was born on January 9, 1990, in the United States. As of 2021, she is 31 years old. She holds American citizenship and belongs to Caucasian ethnicity. Her Zodiac sign is Capricorn.

Details regarding her parents including Father, Mother, and siblings are unavailable. However, she was raised in Dallas, Texas with her family.

Talking about her academic background she attended Baylor University and graduated with a Bachelors Degree of Arts in speech communications.

The reality TV Personality started her career as a model. She appeared in several beauty pageants like Mis Dallas Country, Miss Plano, Miss Frisco, and more. She then started working as a Dallas Mavericks dancer in 2013.

After then, she joined on D210Sports TV in 2015 under the reporting and broadcasting sector. During the time, she also collaborates with Brayan Broaddus’s Dallas Cowboys website to cover the cowboy’s minicamp and media week.

Later, she worked as the interviewer for the Mavs insider on Fox Sports. In 2019, she entered the 21st season of the reality TV show called ‘ Big Brother’. She was the first female to win the powers of Veto on Big Brother 21.

Currently, she worked as an Accountant Executive for Social Revolt Agency. She has also her own Merch, Live love Gameday where she sells online clothing stuff. live love gameday

In 2014, she honored with the Miss Texas Woman of Achievement award for being a mentor.

The reality star hasn’t yet disclosed his exact salary. It is still under review but her estimated net worth is around $1 million-$5 million.

Kathryn stands at a height of 5 feet and 7 inches approximately and her weight is around 55 kg. She has blonde hair color and her eyes color is brown.

Kathryn is active on Instagram with the handle @katdunn where she has over 257k followers. She has a verified Twitter account with more than 57k followers.