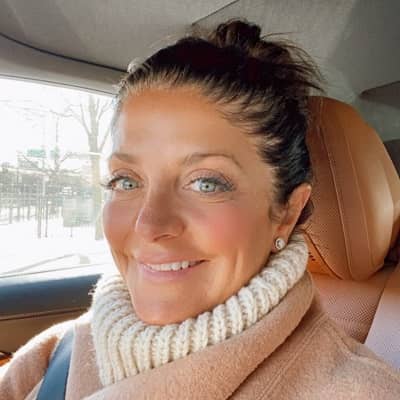 Kathy Wakile is a married woman. She is married to a businessman Rich Wakile. Her husband works in the real estate business and in retail gasoline.

They have been married for over twenty years and together they are blessed with two children: Victoria Wakile, Joseph Wakile. The couple tied the knot in 1993.

In 1994, the couple welcomed their first child a daughter named Victoria Wakile, and a son Mane Joseph Wakile in 1998.

Victoria had undergone two surgeries of benign brain tumors. So, the family is a huge supporter of the National Brain Tumor Society.

Recently, her daughter Victoria married Teddy Kosmidis in West Orange, New Jersey on February 13, 2021. The newly wed couple got engaged back in August 2019.

The couple was firstly set to tie the knot on September 5, 2020, but had to postpone the wedding due to the ongoing coronavirus pandemic.

She gets the limelight after appearances alongside husband Richard Wakile on Bravo’s hit show, The Real Housewives of New Jersey.

Kathy was born on October 4, 1965, in Paterson, New Jersey. Presently, she resides in Franklin Lakes, New Jersey with her husband and two children.

She is of American citizenship and her ethnicity is Caucasian. Kathy is the daughter of Maria Pierri and Anthony Pierri.

Her sister is also a well-known television personality who has been regularly featured on the show as a supporting player.

Moving towards her educational background, she hasn’t disclosed her academic institution.

Kathu rose to fame after joining the reality show in the third season of The Real Housewives of New Jersey with her husband and children.

The show follows the lives of her family feuds and shows how Wakile deals with her kid. Asides from reality shows, she is also author written a book titled “Cookbook Indulge: Delicious Little Desserts That Keep Life Real Sweet.”

She has introduced three product lines including Dolci Della Dea, Goddess Eye Jewelry, and Red Velvet Cosmo based on one of her favorite desserts.

Similarly, she has her own restaurant along with her husband Rich in Bergen Country, New Jersey. The restaurant opened up in September 2017 which specializes in pizza, Italian, and Mediterranean.

Currently, she is the host of her podcasting show “Eat, Live, Love, Indulge with Kathy Wakile”. The show was premiered in August of 2019.

While appearing in the third season of the reality show, Kathy has a dispute with her cousin Teresa. Teresa claimed that her cousin Kathy joined the show behind her back and says she will never forgive her.

Hope that the cousins make up these old disputes. Besides, she hasn’t surrounded by other sorts of rumors and scandals that create headlines in the media.

Also, she stays away from media consequences that hamper her personal life and professional life.

She has an estimated net worth of $5 million through her profession as an entrepreneur and author.

In addition, she appeared on television reality shows where she revealed that she has an annual salary of around $350 thousand.

Talking about her husband’s net worth, her husband is a Lebanese-American businessman who has also net worth of around $5 million.

At the moment, the family lives in their house in Frankin Lakes, New Jersey which they had first purchased as an empty lot for $675 thousand in 2013.

Kathy stands at the height of 5 feet 5 inches tall unfortunately her weight is unknown. She got a hazel eye color with dark brown hair.

Kathy is active on Instagram where she has over 436k followers. Likewise, she is also active on Twitter with over 478.7k followers.