Katie Finneran at present is a married woman. She exchanged vows with an actor Darren Goldstein on 22 August 2010.

The details of their wedding are not yet disclosed. During her time with her husband, they welcomed two children.

Katie gave birth to their son Ty Michael Goldstein on February 3, 2011, and in July 2012, their second kid Wes Goldstein was born. 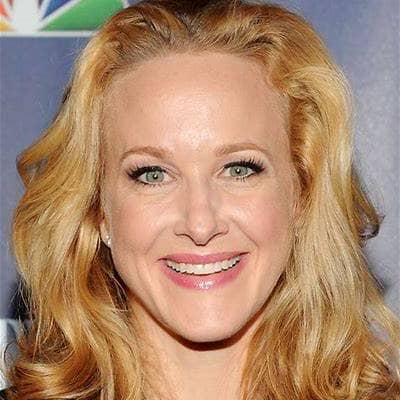 Who is Katie Finneran?

Recently, she was seen in the TV show The Gilded Age playing the role of Anne Morris in 2022. As a theater artist, she acted in acts titled Cabaret, The Iceman Cometh, It’s Only a Play, Annie, and many more.

For her amazing performance in the Broadway play Noises Off plus Promises, Promises, she won Tony Award in 2002 and in 2010 respectively.

Her birthdate is 22 Jan but her birth year is 1971 and she was born in Chicago, Illinois, the United States as Kathleen Finneran. The name of her mother and her father’s name is not stated.

Further, Finneran’s ancestry is Irish, and as per her academics, she passed out from the Arts High School. She then enrolled at Carnegie Mellon University but left her studies to train in acting at HB Studio.

Katie Finneran 1979 has appeared in many screen projects. In TV series, she was featured in Wonderfalls as Sharon Tyler, The Inside as Special Agent Melody Sim, I Hate My Teenage Daughter as Nikki Miller, Brockmire as Lucy Brockmire, etc.

Her other brief roled TV shows are,

Katie has shown her acting skills in various movies too. Some of them are,

By the reports of 2022, Katie Finneran has an estimated net worth of $4 million which she collected from her work.

The cast of the 2009’s movie Baby on Board is keeping herself away from scandals along with desperate rumors.

Katie Finneran’s height is 5 ft 7 inches and her body weight is 64 kg. Furthermore, she has blonde hair and her beautiful eyes are grey in color.

Katie Finneran is officially available on social sites but not on Instagram. Also, on Twitter and Facebook, she is followed by more than 509 and 681 supporters respectively.

Jolene Kim
Tags : Actress Baby on Board Why Women Kill