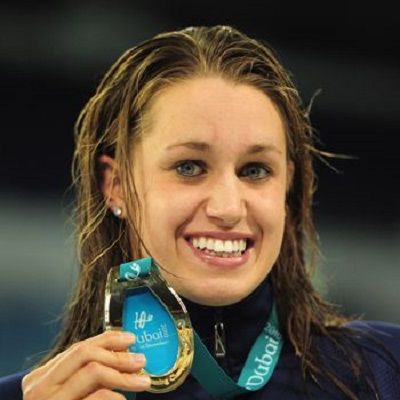 My boyfriend is not a swimmer!

I can just put my head down and train hard.

I don't have a specific mantra

It's more about believing that I'm tough. I've been through a lot, and I'm not wiling to let myself get beat.

I told myself there was no way I was going to let this training go to waste. It was my time, and I was ready to go.

What is the relationship of Katie Hoff?

Katie Hoff is married to Todd Anderson. Todd is a former Michigan State football player. They married in August 2015.

In April 2014, Todd proposed her in the Tampa Bay Rays game after she threw out the ceremonial first pitch. Then tied the knot after a year of being engaged.

From her Instagram, it is known that she likes to spend time in the gym. Apart from that, she loves cycling and cuddling with her pet dog.

Katie resides with her husband Todd in Chicago.

What is Katie Hoff?

American Katie Hoff is an Olympics Medalist Swimmer. Hoff is renowned for the swimming strokes Freestyles and individual medley. She is also a former world record holder for 400m IM.

Last, in 2019, she appeared in the TED TALKS as a Motivational Speaker.

Katie Hoff was born on the 3rd of June 1989 in Palo Atto, California. Her father, John Hoff is a salesman, and her mother, Jeanne Ruark Hoff is a basketball player. They are of Germanic-Dutch ancestry.

She has a brother, Christian.

In which school did Katie Hoff attend?

Both Katie and Christian were homeschooled. Katie started swimming in the Williamsburg Aquatic Club and was coached by Harold Baker.

Later, in 2010, she joined Chapman University in Orange, California. After that, in 2013, she attended the University of Miami in Gables and graduated in 2015.

– 2006, signed 10 years endorsement with British swimwear distributor, Speedo. It was the longest endorsement that the company had until that day.

-In 2010, she started training with the coach, Sean Hutchison. The same year, she earned Gold for 400 m freestyle, and Two Bronze for 200 m freestyle and 400 m IM at the 2010 USA Swimming Championships.

In -2011, she contended in the 2011 World Aquatics Championships and won Goldinr the 4×200-meter freestyle relay.

In -2012, she trained under her former coach, Paul Yetter. However, she was not qualified for the 2012 Olympics.

-2013, enrolled in the University of Miami in Coral Gables as a full-time student.

In -2014, she was forced to withdraw from the Mesa Arena Pro Series due to serious health issues.

-On the 14th of December 2015, she took retirement from swimming due to scar tissue from blood clots in her lungs.

What is Katie Hoff’s net worth?

She has an estimated net worth of $1.5 million US. Her earnings as a swimmer as $67k US.

She is a blue-eyed Blonde. Her height is 5 feet and 9 inches and weighs around 64kg.