Katie Holmes and Jamie Foxx have opened up about their Relationship!! The Couple are really dating!

Updated On October 12, 2022 | Published By: prisma pulitzer | In Affair , Child , Relationship
Share this 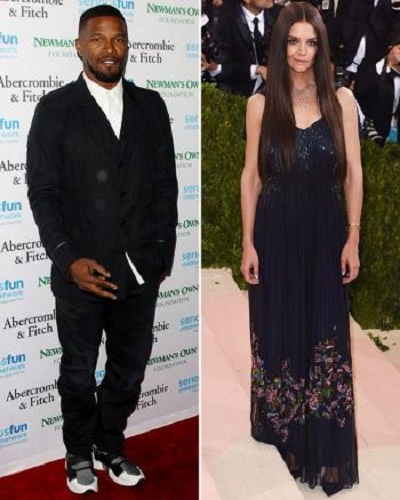 Update: Kaite and Jamie are not together anymore. The split in May 2019.

Katie later dated Emilio Vitolo in September 2020 after her breakup with Jamie. Sadly, even Katie and Emilio parted ways in 2021.

The Relationship of Katie and Jamie

It reportedly said that the couple Kaite and Jamie are secretly dating for four years i.e., from 2013 and after four years they publicly revealed their affair.

The couple has been seen hanging in public places at times and there was news of their alleged affair but the duo kept mum about their dating.

One of their closest sources revealed,

“To make it impossible to get photo evidence that they are together, they traveled in cars with tinted windows and took secret back elevators. Allegedly, they had it down to a science. Katie is tired of playing the hiding game.”

Katie and Jamie were seen on a dinner date in a restaurant in New York City on April 3rd, 2017. The couple also went to Miami together for a vacation in their private jet. Along with Miami, they also went to Mexico for Katie’s birthday.

“They’re going to go out to dinner more and are talking about a trip to Europe.”

Tom has been a very good friend of Jamie and Katie’s ex-husband as well as they share a daughter named Suri. This fact is making the couple hesitant to open about their dating affair.

You may like to read Actor Jamie Foxx splits from Katie Holmes and has found a new girlfriend in actress-model Sela Vave!

“Katie and Jamie are finally getting to a place in their relationship where they are feeling free and proud of their love. They have been secretly dating for years and until recently have kept their passion for each other behind closed doors. Katie and Jamie have been together for so many years, they are slowly bringing their relationship out in public and are OK with their not-so-secret romance,”

Stephen Colletti and Kristin Cavallari had a history together!! Let’s Find out about their Relation with each other During the show Laguna Beach: The real Orange Country!
Tags : American Actor Comedian Filmmaker Model Singer Songwriter