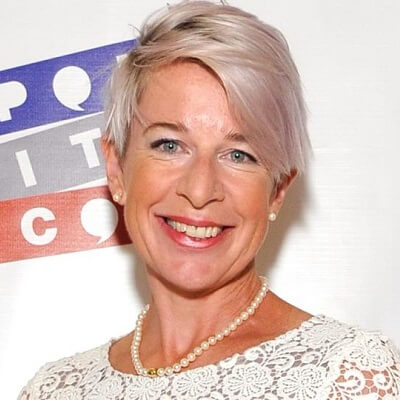 Katie Hopkins is currently married. She is married to husband Mark Cross since 2010. The couple met at Met Office, the place where Katie formerly worked at. They have a son together who goes by the name of Maximillian William Cross.

Previously she was married to Damian McKinney, a former Royal Marine. The couple married in September of 2004 but this marriage was short lived as it only lasted for around 3 years, until 2007. Hopkins and McKinney have two 2 daughters together, named India and Poppy McKinney.

Who is Katie Hopkins?

Katie Hopkins is an English columnist, social critic, and a media personality who rose to fame due to her outspoken and very controversial views, which she often expresses through tweets. Her controversial opinions mainly concern politics, social class, migrants as well as race.

Katie Hopkins was born on the 13th of February, 1975 in Barnstaple, Devon, England. As of 2020, she is 45 years old. She was born to Roy Hopkins (father) and Anona C.O. Crowle (mother). Her father worked as an electrical engineer and her mother was a banker.

She was raised as the younger of two siblings. Katie has an elder sister. She was interested in the military and wanted to work there as an adult. Her ethnicity is English.

Talking about her educational background, she attended a private convent school as a child. Later she studied economics at the University of Exeter while attending Officer Training Camps on weekends.

She went on to complete military training through the Royal Military Academy, Sandhurst but was never commissioned as it was later discovered that she suffered from epilepsy.

At the start of her career, Katie Hopkins moved to the U.S. and worked at a business consultancy in Manhattan, New York. She returned to the U.K. in 2005 and a year later found work as a global brand consultant at Met Office.

As she was working there she got a chance to participate in the third series of the BBC show, The Apprentice. There, she became known for her outspokenness as well as her very controversial opinions, which she expressed with confidence in front of the camera.

After the show, she ended up losing her job at Met Office. After that, she took part in various shows as well as reality series. She also joined The Sun as a columnist in 2013, where she was publicized as the world’s most controversial columnist. She worked there until 2015 and after that worked for Mil Online until the end of 2017.

Hopkins was active on Twitter until her recent permanent ban and expressed most of her opinions through tweets.

As of 2020, Katie Hopkins has a net worth of approximately $4 million. She has not revealed anything about her annual salary though as her income source remains unknown as of now.

Katie has always been a subject of controversy for her views and the way in which she expresses them. This has led to her being sued for 24kgbp in damages and 107k in legal costs for falsely accusing writer Jack Monroe. She was also sued for 150k GBP by the Mahmood family after Hopkins wrote 2 articles for Mail Online, accusing the family of being extremists. Her tweets have always been pro-Trump, anti-immigration.

She has been heavily criticized for expressing her opinion in a very drastic way, as when she compared migrants to cockroaches. Just in January, her Twitter account was temporarily banned for violating its anti-hate policy. However, she took this lightly and due to her repeated hateful tweets her account was permanently banned in June of 2020. She was also criticizing the Black Lives Matter movement as through her tweets prior to her ban.

Katie stands at a height of 5 feet 7 inches and weighs approximately 59 kg. She has blonde hair and blue eyes. Information on her other body measurements has not been shared by her.

Hopkins is currently active, only on Instagram, where she has amassed a following of 90.2k people. She was formerly very active on Twitter and shared most of her view through the platform. However, this all came to an end in June when Twitter permanently banned her for violating its anti-hate policy.

You may also like to read more about the Bio, Career, Net Worth, Body Measurements, and more about CariDee English, Scarlett Moffatt, Holly Hagan, and more.

English controversial columnist Katie Hopkins: her struggles with epilepsy, her open brain operation and cure of her epilepsy post-surgery!