Famous American competitive swimmer. She has won five Olympic gold medals and 14 world championship gold medals, the most in history for a female swimmer.

Katie Ledecky has largely remained silent about her personal life while interacting with the media, which makes it difficult for us to ascertain anything about her dating history and love life.

She is currently in love with swimming and doing great in it. 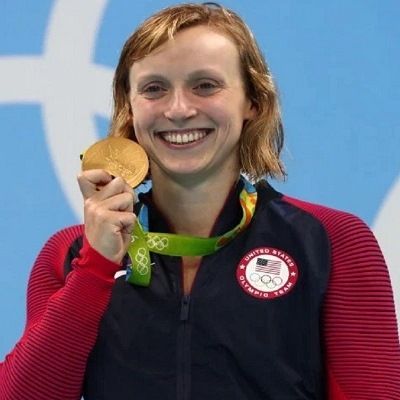 I would encourage you to set really high goals. Set goals that, when you set them, you think they're impossible. But then every day you can work towards them, and anything is possible, so keep working hard and follow your dreams.

I try to make the good days great and take something positive from the days I'm not feeling good - work on technique or something like that.

I think we have the approach that every race is a sprint. Some races are just longer sprints than others.

Who is Katie Ledecky?

Katie Ledecky is a famous American competitive swimmer. She has won five Olympic gold medals and 14 world championship gold medals, the most in history for a female swimmer.

Katie Ledecky was born in Washington, D.C., the United States on March 17, 1997. Her birth name is Kathleen Genevieve Ledecky and she is currently 23 years old.

Her father’s name is  David Ledecky and her mother’s name is Mary Gen Ledecky. Whereas, at the age of six, Ledecky started taking swimming lessons after getting inspired by her brother and her mother, who, during her time at the University of New Mexico, used to swim as well.

Talking about Katie’s education history, she studied at Little Flower School in Bethesda, Maryland before attending Stone Ridge School of the Sacred Heart.

Talking about her profession, in 2012, Katie Ledecky started training at the Nation’s Capital Swim Club, where initially her coach was Yuri Suguiyama. After Yuri left the club, she began training under coach Bruce Gemmell, who would later guide her through the 2016 Summer Olympics.

After graduating in 2015, she enrolled at Stanford University on a swimming scholarship. She is part of coach Greg Meehan’s Stanford Cardinal women’s swimming team.

In addition, she created world records in the 400- and 1500-meter freestyles, clocking 3:58.37 and 15:28.36, respectively. Her medals effectively made her the first female athlete in history to win four individual gold medals at a single Pan Pacific Championship.

Ledecky continued her stellar form at the 2015 World Aquatics Championships in Kazan, Russia. She won five gold medals there as well and set up three records. Her gold medals were in the usual events, 200-, 400-, 800-, and 1500-meter freestyles and the 4×200-meter freestyle relay.

As a freshman at Stanford University, she broke 12 competition records during the 2016-17 NCAA season. She played an instrumental role in Stanford’s first team title win since 1998 at the NCAA Championships in Indianapolis. She also won a silver medal in the 200-meter freestyle with a time of 1:55.18.

At the 2018 NCAA Championships, Ledecky registered wins in the 500- and 1650-yard freestyles. After the 2017-18 NCAA season concluded, Ledecky announced her decision of taking on professional endorsements and sponsorship opportunities.

On May 16, 2018, Ledecky appeared as a professional swimmer for the first time at the TYR Pro Swim Series in Indianapolis, Indiana, and went on to set a new record in the 1500-meter freestyle, clocking 15:20.48. Since June, she is signed to Tyr Sport, Inc. on a sponsorship deal.

She won Associated Press Female Athlete of the Year. Then, she won the Honda-Broderick Cup.

Katie Ledecky has a height of 6 feet and she weighs is 70Kg. Additionally, her hair color is blonde and her eye color is green.

What does Katie Ledecky do for a living?

She is an amazing competitive swimmer.

How much does Katie Ledecky make?

She signed a contract of $7 million per year.

What is Katie Ledecky majoring in?