Katie Lee is a cook who hosts The Kitchen. She started cooking at age four with her grandma. She would cook vegetables grown from her grandpa's garden. Katie is married. 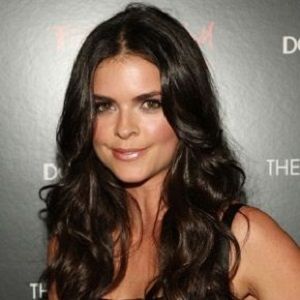 “We are made so that we love first, when we see them painted, things we have passed perhaps a hundred times, nor cared to see

" “My beloved Africa, the fauna, flora, sounds, and smells which you will hold in your memory for years to come”

“The part of the canyon I loved the most is still under 500 feet of water. I was lucky enough to have seen it in its pristine state.”

For me, cooking wasn’t just a hobby growing up – it was a way of life.

Katie Lee is married to her longtime boyfriend, Ryan Biegel on 1st September 2018.

Her husband is a producer and actor. Their wedding ceremony was an intimate and a small one held at  Amalfi Coast, Lo Scoglio da Tommaso hotel and restaurant at the Marina del Cantone on the Amalfi Coast of Italy.

Their close friends and family were invited to their dreamy wedding ceremony. They engaged on 23rd March 2018.

In Sep 2020, this couple is blessed with a daughter named Iris Marion Biegel.

She resides in West Village of New York City with her husband and daughter. The family also has a pet dog, Gus. Gus is a rescue dog and it’s breed is Chihuahua mix.

She was previously married to the famous American singer-songwriter, Billy Joel. They dated each other for a few years before getting married. After a few years of dating, the couple got married in 2004. They stayed married for six years and divorced in June 2009.

After her divorce from Billy, she dated the American fashion designer Yigal Azrouel for over a year in 2010. After that, Katie began dating the famous Canadian-American actor Will Arnett in 2013.

After a few months of dating, the couple broke up later that year.

Who is Katie Lee?

She is the co-host of Food Network’s talk show, The Kitchen, and the Cooking Channel’s Beach Bites with Katie Lee.

Katie Lee was born on September 14, 1981, in Huntington, West Virginia, the United States with Asian ancestry. Her parents are Steve Lee, father, and Kim Becker, mother.

She learned to cook at the age of four with her grandma. She made biscuits with her standing on a stool.

She would pick the seasonal vegetables from her grandfather’s garden and would follow her grandmother, Dora’s instructions while cooking. Moreover, they had a dinner menu every evening.

Her cousins had cows and pigs, hence they shared food with eachother.

Her hobbies are surfing, traveling, and playing with her pug. Unlike many people, she loves wasabi.

She studied journalism and food science at Miami University in Oxford, Ohio, and graduated in 2003. Before fame, she worked in a number of restaurants.

Lee began her career working in several restaurants and wine stores. In 2003, she helped to open Jeff and Eddy’s Restaurant where she served as the house fishmonger.

In July 2005, Lee created the foodie website OliveAndPeach.com with partner Aleishall Girard. Shortly, her website led her to fame. She is very grateful to her mentor, Bobby Flay.

In June 2011, Lee released her first novel titled Groundswell. Previously, she served as a food and lifestyle contributor for The Early Show. She has also worked as a correspondent for Extra Magazine.

Lee is currently working as a co-host of Food Network’s talk show The Kitchen, and the Cooking Channel’s Beach Bites with Katie Lee.

She has a net worth of $10 million. But her salary and other earnings are unknown.

She keeps sharing cumcious recipes on her Instagram handle. Her recipes are loved and shared by her fans.

Rumors were that Katie was in a relationship with a guy named Yigal Azrouel, which was the reason behind her divorce from Billy Joel.

Katie Lee has a good height of 5 feet 7 inches with a bodyweight of 55 Kg. She is a brunette with eyes. Her waist size is 24 and her hips size is 35.