Katie lunge is single and not dating anyone nor does she has a boyfriend right now.

It seems like she is focusing on her career or it might be she is dating someone secretly and not revealing it publically. Moreover, she is enjoying her private life.

Previously, she has been in a relationship with Leo Ku 2008 who is a Hong Kong singer. The specific reason for their break up is not revealed yet. She has not shared with the media why they break up. 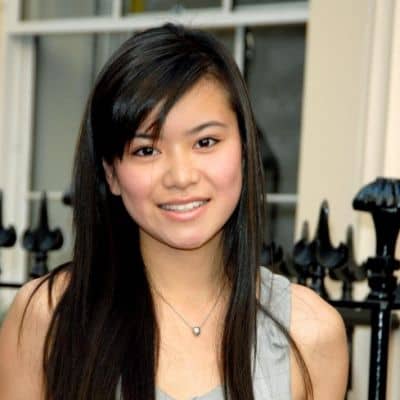 Who is Katie Leung?

Katie Leung is a famous Chinese-Scottish actress who works in the American and British Film industries.  She is famous for playing the role of Cho Chang, a lead character in Harry Potter in the Harry Potter film series

She has played in many famous Television and films. Recently, she played the role of Natasha in Locked Down(2021).

Katie Leung was born on 8 August 1987  in Dundee, Scotland. Further, she often identifies Motherwell, North Lanarkshire as her birthplace because she spends most of her childhood days there.  Her descent is Cantonese and her Zodiac Sign is Leo.

She is born to Kar Wei Li and Peter Leung. Along with that, her brother’s name is Jonathan Leung and Darren Leung. Although she has a younger sister named Violet.

Their parents got divorced when she was three years old. After moving back to Hong Kong she lived with her father and stepmother along with her Siblings.

She attended secondary school at Hamilton college, South Lanarkshire. Moreover, she completed her BA acting course at the Conservatoire of Scotland in Glasgow.

She started her career when her father saw an advertisement for Harry Potter and the Goblet of Fire casting fire call. Her father supports her to try it out.

For that movie audition, she waited for four hours in line for just five- minutes. She was called back for a workshop about 2 weeks later. Over 3000 other girls, she was cast as Cho Chang.

In 2005 she made her acting debut in the film Harry Potter and the Goblet of Fire in which she played the role of Cho Chang.

By the end of the Harry Potter Films, Leung that she was uncertain if she wanted to continue a career in acting.  Moreover, she was inspired by attending a drama course at the Royal Conservatoire of Scotland.

In January 2022, She published the essay “Getting into Character” in the book East Side Voices. In her essay, she wrote about how her race impacted her knowledge growing up and her acting career.

Katie Leung: Net worth and salary

Katie Leung is a Chinese Scottish actress whose net is approximately $5 million dollars as of 2022. That includes her cars, houses, personal stuff, and fixed assets. Further, there is no more information about her annual salary.

When Katie Leung was 16 years old she discovered that she was being bullied by her entire website fans and her experiences with racist fans. This creates Rumors and scandals among the group of people.

Katie Leung is a beautiful and gorgeous lady whose height stands at 5 feet 5 inches and her weight is 52kgs. Her body measurement is 32-23-34 and her dress size is 4 US and her Bra size is 32B. Along with that, she has black hair and black pairs of eyes.