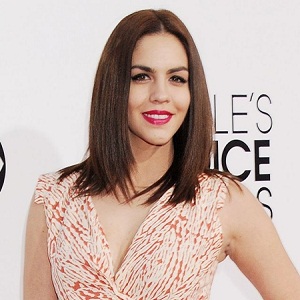 Katie Maloney has been in a relationship with Tom Schwartz who also starred in Vanderpump Rules. They officially got hitched on 17th August 2016. They tied the knot in front of their close family and friends in Northern California.

There was news in March 2017, the husband-wife are heading for divorce. But it was just a rumor and they are living together.

Who is Katie Maloney?

Katie Maloney is a reality series star who made her debut through the famous reality show Vanderpump Rules. Vanderpump Rules is an American reality television series airing on Bravo that debuted on January 7, 2013, with the first season originally eight episodes.

Katie Maloney was born on January 16, 1987, in Park City, Utah, United States. Her nationality is American and ethnicity is Caucasian.

She is the daughter of Richard Maloney(father) and Teri Noble Maloney(mother). She has a brother named Joey Maloney and he is a producer and a photographer.

She started appearing on-screen as early as 2008 and had early roles in 2009: A True Story as Sara Ford and Harper’s Globe as Ashley.

There is no information on Katie’s educational background.

Katie Maloney is a TV personality in her profession. Katie is known for her role in the television series. During her initial phase of her career, she worked as a waitress at SUR Restaurant and Lounge.

Later, in the year 2008, Katie started her journey towards the television. She made her acting debut on the television drama show 2009: A True Story.

Katie served as a music supervisor and producer for the series BlackBoxTV. Later, she appeared in the third season of the American television series Vanderpump Rules.

The role in the movie was one of the biggest achievements for Katie. Besides these, Katie co-founded the beauty, fashion, and lifestyle website Pucker and Pout.

Katie Maloney: Salary and Net Worth

Her salary is not disclosed yet. Katie Maloney’s net worth is about 30 thousand USD.

Katie has a height of 5 feet 8 inches. Her body weighs 56kg. She has dark brown hair and brown eyes. Furthermore, there are no details regarding her body measurements.