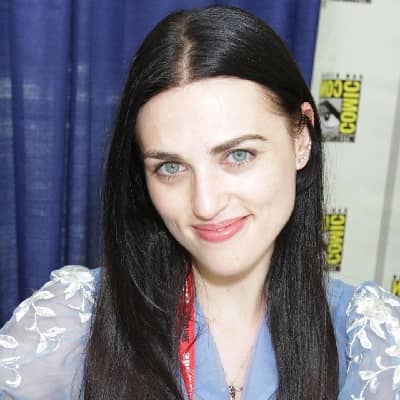 Katie Mcgrath prefers to keep her life pretty low-key from the public so, there is not much information available regarding her private life.

Previously, she was rumored to be dating fellow actor Colin Morgan since 2010. They met for the first time on the set of “Merlin”. In October 2016, there were engagement rumors as well but the duo has been rejected the news.

Also, she was rumored with actor and musician Sam Witwer. Nevertheless, she is possibly single at the moment.

Who is Katie Mcgrath?

Katie Mcgrath is an Irish actress, He came to fame after appearing as Morgana in the BBC One series Merlin and Lucy Westenra on the British-American series Dracula.

Kati was born on October 24, 1983, in Dublin, Ireland. Her full name is Katherine Elizabeth McGrath. She is the younger child of her parents Paul Mcgrath and Sean McGrath. Her father works as a computer operator whereas his mother is an Irish designer.

She has two older brothers named Sean Mcgrath, an online media manager, and Rory Mcgrath, a post-production producer. Talking about her academics history, he attended International Baccalaureate at St. Andrew’s College. Later, he switches to Trinity College, Dublin, and graduated with a degree in history with a focus on Russian history.

Kati holds an Irish nationality and as well as Irish ethnicity.

Previously, Katie worked as a fashion journalist at Image magazine. Later, she served as a wardrobe assistant on the set of The Tudors. She also takes participated in the Ballygowan ‘Be the Face of MTV’ competition. Mcgrath made her acting debut in a TV series Damage as Rachel in the year 2007. The same year, she also appeared in the short film Pebble as Tara.

The following year, she starred in five television series such as Eden (As Trisha), The Tudors (as Bess), Freakdog (as Harriet Chambers), The Roaring Twenties (as Vixen), and Merlin (as Morgana Pendragon). In 2013, Mcgrath was cast in the main role of Lucy Westenra in the horror drama television series, Dracula. Similarly, she was the lead character in Aaron Martin’s 2016 television series Slasher as Sarah Bennett. She was also featured in Hozier’s music videos From Eden in 2014.

Currently, she is featuring in the CBS superhero television series Supergirl as Lena Luthor.

Katie has managed to maintain a clean profile till now. She stays a mile away from any controversial acts that create a huge buzz in the media so, she hasn’t been part of any sorts of rumors and scandals.

The actress has amassed quite a fortune. As of 2021, she has an accumulated net worth of around $4 million throughout her profession as an actress and endorsements. Her salary, assets, and other income are still under review.

The actress has a well-maintained body physique. She stands at the height of 5 feet 5 inches tall and her weight is around 61 kg. She has dark brown hair color and green pair of eyes.