Katie Pavlich is an editor of Townhall Magazine, Fox correspondent. Katie is married to Gavy Friedson.

Katie Pavlich is married to Israeli resident Gavy Friedson. They dated for a few years before getting married in 2017. Her husband works in an NGO. They exchanged vows on 5 July 2017.

She loves spending time with her husband Gavy and they keep holidaying, traveling in different locations.

Previously, Katie was in a romantic relationship with Brandon Darby. They were together for a short while and then broke up. 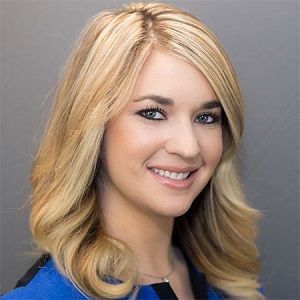 When you are handed something instead of having to work for it, you don't respect it as much.

I think if you have to make sandwiches to get a ring - you should do good things for your man, but I don't think I would do that.

Well, I am actually a daughter of the American Revolution.

Who is Katie Pavlich?

Katie Pavlich is one of the popular American conservative commentators and authors. She is famous for her career as a news editor for Townhall.com

Katie Pavlich was born on July 10, 1988, in Arizona, the United States as Catherine Merri Pavlich. She is 33 years old.

She was raised on a dirt road, in mountainous areas of Northern Arizona. Her father and mother’s names are unknown. There is no information about her siblings too.

Her ethnicity is Mixed (Irish, German, Croatian, and Australian) and her nationality is American.

Pavlich did her schooling at Sinagua High School. At that time, she heavily gets involvement in sports and played volleyball and basketball.

After her high schooling, she obtains a Bachelor’s degree in broadcast journalism from the University of Arizona in 2010.

Katie Pavlich moved to Washington D.C. in 2010. Her career started as the journalist and news editor for the website Townhall.com. She serves as a contributing editor for the Townhall magazine.

Pavlich works for the National Fellow as Washington Fellow. She got the opportunity to perform in various programs. Also, she as a reporter has always brought out the necessary reports.

She is known for the ATF gun-walking scandal in the Fast and Furious scandal. She also won the Blogger of the Year title at the CPAC 2013.

Besides, Pavlich has likewise authored two books the Fast and Furious: Barack Obama’s Bloodiest Scandal and its Shameless Cover-Up in 2012, which earned her a lot of recognition.

In 2014, she was back again with her book titled Assault and Flattery: The Truth About the Left and Their War on Women. The book was so great and it was one of the reasons to gain her media attention. In August 2017, Pavlich was retweeted by President Trump.

From 2018, she has been running a podcast called ‘Everything’s Going to Be All Right,’ alongside former White House press secretary Sean Spicer.

She received the Woman of the Year and Conservative Leadership Award from the Clare Booce Policy Institute in 2014.

She also became the winner of the Blogger of the Year at the Conservative Political Action Conference in 2013.

Pavlich has also published a number of popular books through which she must have good earnings. The talented journalist may have a net worth of around $5 million as of 2022.

Katie doesn’t like to share her personal life between social media and seems running her life smoothly.

Katie stands with a height of 5 feet 5 inches and her weight is 64 kg. Her body measurement is 37-24-37 inches. Her dress size is 10 US. She has blonde colored hair and green colored eyes.