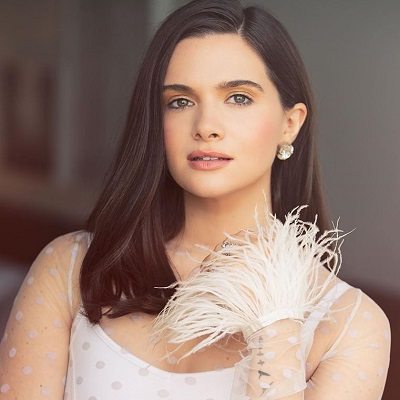 Katie Stevens is married to her long-term boyfriend, Paul DiGiovanni. Her husband, Paul is a musician by profession.

Katie had known Paul when she was 14 years. At the time, she went for one of the shows of Paul. After seven years, they first talked with each other. After that, they dated each other for six years.

Moving forwards, on the 12th of October 2019, they got married to each other at Saddle Woods Farm in Nashville, Tennesse following the idyllic ceremony.

Who is Katie Stevens?

American Katie Stevens is a Teen Choice Award-winning actress and singer. She is renowned as Karma Ashcroft of Faking It.

Last, in 2020, she appeared in the series, The Bold Type as Jane Sloan.

Katie Stevens was born on the 8th of December 1992 in Southbury, Connecticut to Mark and Clara Stevens. Her birth name is Katherine Mari Stevens. She spent most of her childhood in Middlebury.

Her mother, Clara is of Spanish ethnicity with Portuguese roots. However, her father, Mark is of British-Germanic ethnicity. She has a brother, Ravens Stevens.

Talking about her educational background is a graduate of Pomperaug High School. During High Schooldays, she used to be a member of the swimming team of the school.

Since childhood, Katie Stevens was passionate about performing. She was just seven years old, when she sang the song, Form This Moment On. Moving forwards, she started performing in the local theater. Some of her plays include The Wizard of Oz as Dorothy and High School Musical as Sharply.

She got noticed nationwide when she auditioned for the American Idol in Boston. In the audition, she sang the song, At Last, and advanced to Hollywood.

In the show, she secured her position as top 10. However, she was eliminated from the show as the top 9 contest of the year. After that, she went for a musical tour with American Idols Live! Tour 2010.

In 2013, she restarted her career as an actress with the short, Running Up That Hills as a Girl at Party. The following year, she made her movie debut with the movie, Friends, and Romans as Gina.

The same year, she featured the series, Faking It as the main cast. In the series, she portrayed the character of a popular high school girl, Karma Ashcroft. The series became a milestone in her acting career. For the character, she is awarded the Teen Choice Award.

As of 2020, she has an estimated net worth of $1 million. As an actress, her earnings are in the range of $21k to $215k. Besides that, she also makes through the royalties music video too.

Katie Stevens has brown eyes with brunette hair. She stands at a height of 5 feet 3 inches and weighs around 53 kg.

With the same post, she disclosed that she is fighting with a benign tumor, Fibroadenoma. At the time, she was panic and emotional too. After consulting with a breast specialist and having an ultrasound, she found that it is not cancerous. Also, she made it clear that she is totally fine and happy.

You may also read the bio Alice Evans, Emma Davies, and Kate Phillips.