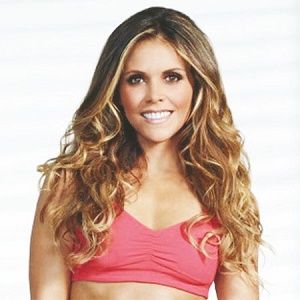 I am so much happier, confident in myself and feel like I can do anything.

My mom is proof that you can do anything you set your mind and heart to~ at any age and any weight! It will save YOUR LIFE!

Stop waiting for tomorrow… or Monday. I’ve been there. You are the only one in control of your weight and health. Take charge and make a change now.

Katrina Hodgson is a married woman. She is married to her boyfriend, Brian Scott. They got married in August 2018. They met for the first time when their mutual friends invited for a movie night get-together. They dated for a decade and he decided to propose her. Brian took the permission and blessings from Katrina’s father and brother before proposing her.

Then after the engagement, the couple tied the knot on their 10th anniversary in Malibu. The couple is blessed with their married life without any rumors of divorce or an extra-marital affair.

Who is Katrina Hodgson?

Katrina Hodgson is a personal trainer and has a website, ‘toneitup.com’. She is an inspiration for people who think that to be fit and healthy is a myth. She herself has transformed her body with diet and exercise. She has posted a picture of her photo when she was heavy and besides is her present photo, where she looks absolutely fit.

Katrina was born on 8th November 1982, in Londonderry, New Hampshire, United States. Her ethnicity is unknown and nationality is American. Her mother’s name is Jane Hodson and father’s name is Chris Hodgson. Her mom also lost 60 pounds to be healthy. She has an older brother and she does not have any sister.

Katrina Hodgson graduated from Keene State where she chose health science as a major subject and nutrition as a minor subject.

Hodgson, while she was in her college days was as normal as anybody. However, she always believed that if you set your mind and heart to, you can achieve anything you want. The change came when she met Karena Dawn, a fitness trainer. She says that she and Karena started a diet plan together.

She then started applying this theory practically in transforming her body with a good nutritional diet and exercise. She stated that she felt much happier and confident after her body was toned up. She says that this can save your life. After she achieved her target, she started training others as well.

She trained as a fitness instructor in Boston Sports Club. She also co-designed fitness DVDs. Later, she started a website, ‘toneitup.com’ where she started posting the transformation photos of whom she has trained and their inspirational stories.

Katrina’s net worth is estimated to be $300 Thousand and her salary is not available via any sources.

During her entire career, she maintained a top-notch professionalism over her work. Her work was always admirable, and her hard work reflected on how well she did in her career. She always maintains a decent and admirable image in her entire career without attracting any rumors and controversy. Instead of attracting unwanted attention, she made everyone believe that she has no interest in becoming a controversial figure.

Being a fitness freak and instructor, she has a well-maintained body. Her hair color is dark brown and eye color is brown. However, her height, weight, and other body measurements are not available.

Also, read the affair, salary, the net worth, controversy, and the bio of Trish Stratus, Kyrzayda Rodriguez, Tammy Hembrow