Katty Kay is a BBC presenter, broadcaster, author. Katty is married to her longtime boyfriend Tom Carver and together they are parents of four children. 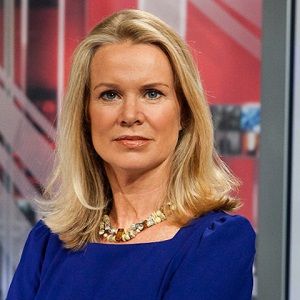 Having talent isn’t merely about being competent

confidence is actually a part of that talent.

Simply put, a woman’s brain is not her friend when it comes to confidence. We think too much and we think about the wrong things. Thinking harder and harder and harder won’t solve our issues, though, it won’t make us more confident, and it most certainly freezes decision making, not to mention action. Remember, the female brain works differently from the male brain

we really do have more going on, we are more keenly aware of everything happening around us, and that all becomes part of our cognitive stew. Ruminating drains the confidence from us. Those negative thoughts, and nightmare scenarios masquerading as problem solving, spin on an endless loop. We render ourselves unable to be in the moment or to trust our instincts because we are captive to those distracting, destructive thoughts, which gradually squeeze all the spontaneity out of life and work. We have got to stop ruminating.

Confidence is the purity of action produced by a mind free of doubt.

What is the relationship of Katty Kay?

Katty Kay is a married woman. She is married to Tom Carver, one of the famous writers. Tom was previously a reporter at BBC who is now the Senior Vice-President at the Control Risks Group, a consulting company.

The couple is blessed by four children three daughters Poppy, Jude, and Maya, and a son Felix. Presently, she is married to Tom and lives happily with her family.

Who is Katty Kay?

Lat, she covered the US election night along with her co-host, Andrew Neil.

Reflecting on her early life, Katty Kay was born on November 14, 1964, in Wallingford, Oxfordshire, United Kingdom. Her birth name was Katherine Kay.

Her father was a British diplomat and her mother was a journalist. She holds a British nationality and belongs to English ethnicity. Kay experienced her childhood in Blewbury, Berkshire, and spent time in various Middle East countries.

Regarding her education, she attended Oxford University in Oxford, England from where she received her graduate degree. She learned various languages at the university. She can fluently speak Italian and French languages.

After her graduation, she began her career working at the Bank of England. She worked there for a short period and left the job. Then she moved to Zimbabwe where she worked for an aid agency.

Furthermore, she commuted to London where she got a job at a radio station operated by the BBC World Service. Likewise, she left London when she was transferred to the Tokyo section of BBC News in 1992. She served the Tokyo branch for about four years and then in 1996, she began working for the Washington, D.C. branch.

Shortly afterward, she returned to London once again to work at The Times, a daily national paper. Katty Kay worked for The Times till 2002 when she moved to the United States to join BBC once again.

In June 2004, Katty Kay worked as a co-presenter of BBC World’s news program. Moreover, she was chosen as the correspondent for BBC World News America, which aired on networks like BBC News Channel, BBC America, and BBC World.

Furthermore, Katty has frequently appeared as a guest in NBC’s productions like Meet The Press and The Chris Matthews Show. She has also made a guest appearance on CNN’s Larry King Live.

Katty has penned a couple of books. In June 2009, a book titled Womenomics, written by Katty Kay and Claire Shipman was published by Harper Collins. They both together wrote another book called The Confidence Code: The Science and Art of Self-Assurance—What Women Should Know.

Katty’s net worth is estimated to be 1.3 million as of 2022, according to the sources. Her salary is unknown. However, the average salary of a journalist is $44K in the US.

As per rumors and controversies, Katty was rumored that she made plastic surgery. During the inaugural ceremony of Donald Trump, Twitter users criticized her for making a racing statement on live TV. She pointed out that a black woman was not an ex-first lady.

Katty Kay has an average body with blonde hair and blue eyes. She is 5 feet 9 inches and weighs 64kg. Additionally, her body measurement is 35-25-34.

Due to her successful career, Katty has been connected with different sorts of social networking sites mainly Instagram and LinkedIn. She has more than 1.6K followers on her official Instagram account. Her official Facebook and Twitter accounts have not been disclosed yet.