Katy Mixon is an American actress of the series Eastbound & Down. She is engaged. 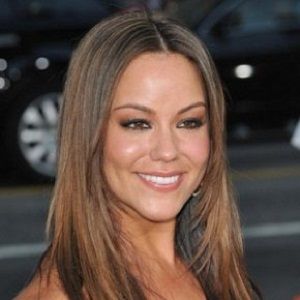 You can't do Shakespeare with a Southern accent, honey.

Pensacola isn't Florida, really. It's the Panhandle. It's right up there near Alabama and Louisiana. It's, like, a stroll away from New Orleans. I feel like New Orleans is home.

A lot of people don't know that my background is completely classical. For a while there, I was all about Moliere and the Greeks and Brecht and Tennessee Williams.

What is the relationship of Katy Mixon?

Katy Mixon is married to an Olympic javelin thrower Breaux Greer. The couple got engaged in mid-October 2016. They are in a relationship since 2012.

Katy was pregnant with their first baby in the year 2016 and she gave birth to a baby boy on 19 May 2017. They named him Kingston Saint Greer.

On May 16, 2018, the couple welcomed their second child a baby girl named Elektra Saint Greer.

Previously, Mixon has not been linked up with multiple personalities in the past. She was once been spotted with Bobby Deen an American chef, but later she cleared that she was in a relationship with him.

They both shared many memories from 2010 to 2013. As the couple split up she again became single and till now there is no confirmation from her side about any relationship.

Who is Katy Mixon?

Katy Mixon is an American actress who is recognized for her role in the HBO comedy series Eastbound & Down. She also played in the movie The Quiet.

She is also appreciated for her voice-over work in Minions. Mixon did the leading character in the ABC comedy series, American Housewife in 2016.

Katy Mixon was born on March 30, 1981, in Pensacola, Florida. Her nationality is American and her ethnicity is North American.

She was born in a large family with seven siblings which were from their mother, Donna, and father, Fred Mixon’s previous marriages.

Mixon won a couple of beauty competitions when she was schooling in Alabama, Birmingham & Pensacola.

Mixon graduated from Pensacola Private School of Liberal Arts. Later she studied for a bachelor’s in fine arts at Carnegie Mellon School of Drama in Pittsburgh.

She flew to Los Angeles after finishing her studies to pursue a career in the film industry.

Mixon’s first acting job was to play Calpurnia in the Utah Shakespearean Festival’s presentation of Shakespeare’s Julius Caesar. she starred in the premiere of American Standard at the Los Angeles Edgefest.

Mixon did her first movie debut in the thriller movie The Quiet. she also did the romantic comedy Blind Dating in the same year 2005.

She also had a role in the 2008 film Four Christmases. Next year she got a role in 3 more movies The Informers, State of the Play, and All About Steve.

She also did the HBO baseball comedy series, Eastbound & Down the same year. In 2010 she was cast in Mike and Molly the series ran for 6 seasons and ended in 2016. She also did the action movie in 2011, Drive Angry, and voiced for Minions in 2015.

Mixon was cast in her first leading role on the ABC comedy series American Housewife in 2016.

She starred as the lead character Katie Otto in the ABC comedy series American Housewife from 2016 to 2021. Mixon played Betsy Faria in the NBC miniseries The Thing About Pam in 2022.

As of 2022, Mixon’s total net worth is $10 Million, whereas her annual salary is still uncalculated.

Mixon was once controversial because some media person spoke about her weight, to which she strictly said that I am who I am, if I lose weight I lose weight.

Katy has an attractive body with a body measurement of 33-27-35 inches. Her height is 5 feet 6 inches.

Her hair color and eye color both are dark brown color. Other information on her body measurement such as weight, dress size, shoe size, etc. is unknown.