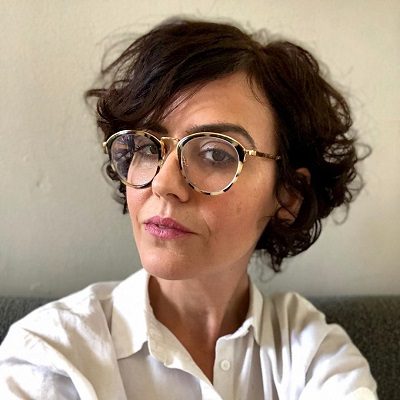 Katy Stoll is in a relationship with a man whose name is unknown. She broke the news of her relationship on the 15th of February.

In the post, she disclosed that the couple moved in together. Till the date, the couple has not revealed the story behind them.

Her Instagram posts suggest that she loves to hang out with her friends. Besides that, she has a soft corner for dogs and cats in her heart.

Who is Katy Stoll?

American Katy Stoll is an actress and producer. She is renowned as the Lizbeth of the romantic comedy, How I Met Your Mother.

Also, she is the host of the podcast Some More News and WorstYearPod.

Last, she has appeared in the TV series, Off Hours as Katy.

She was born Kathleen Rachael Stoll on the 15th of August 1984 in Santa Clara County, California. She is of German ethnicity.

Her father’s name is Michael Stoll but her mother’s name is not revealed. However, she has uploaded her photo on her social media account.

However, She has an elder brother, Ryan.

She earned a bachelors’ degree from the University of California San Diego. Besides that, she also attended the training the course of Flim and Audition technique from Michael Woolson Studio.

Also, she attended Advance scene study training at the UCSD.

– In 2006, Katy Stoll started her career as an actress with the comedy, Two Tickets to Paradise. In the movie, she appeared in the minor character of a Bargirl.

– Following the movie, she started making her appearance in the TV series too. She met her first TV appearance with the series, 10 Dates from Hell as Melissa.

– Till the date, she has featured in more than 30 TV series. Some of her TV series along with the year and character name is:

– Besides TV and movies, she active in commercials and theatre plays too.

In 2012, she expanded her career as a producer for the TV series. Her debut series as a producer is Cracked Advice Board. In the series, she was associated with the series for 5 episodes.

Following that, she produces the series like Family Meeting, Disney Owns You, and We the Internet TV.  In 2018, she produced her very first movie, Spell.

Apart from that, she also makes as a host of the podcast. The amount would be in the range of $45k. Besides that, she also earns through her appearance in the commercials.

In 2018, things got pretty heated when she tweeted her picture. In the pic, she was wearing a t-shirt with the print, The Past is Male.

Due to the many of her followers slammed saying that she is making sexist comments. Later, she clarified that she print doesn’t mean that she hates the men. It meant that the past was based on the sexist patriarchy but now, the future will be equality.

After the clarification, many people liked what she wanted to convey in the public.

Katy Stoll has a brown pair of eyes and dark brown hair. Her height is 5 feet and 5 inches and weighs around 54 kg.

She also has a self-titled YouTube channel with 4.8k subscribers and 62k views.