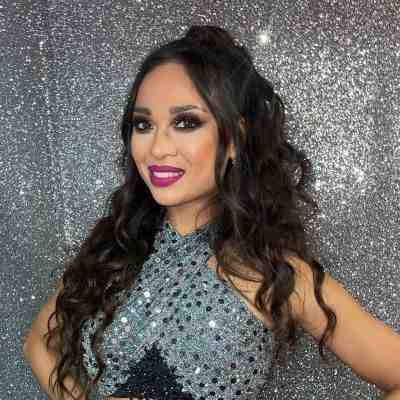 Talking about her relationship details, Katya Jones is possibly single and she might not be dating anyone at the moment. He seems to be focused on her career and professional life.

Previously, she was married to her longtime partner, Neil Jones. The couple married on 3 August 2013. However, in 2018, some pictures of Katya and her dance partner, Seann Walsh were caught on camera kissing each other.

They were photographed embracing and kissing each other outside the Duke of York pub in Marylebone, London. However, Neil and Katya mentioned there was nothing left behind in this incident and their relationship was fine.

Sadly, the couple separated on 18 August 2019 without any unclosed reason.

Who is Katya Jones?

Katya Jones is a well-recognized Russian dancer, choreographer, and environmentalist. Jones is widely famed for her appearance on the competition show, Strictly Come Dancing which she won in 2017 with her dance partner, Joe McFadden.

Moreover, she paired with retired professional and Olympic champion boxer Nicola Adams in the 2020 season to participate in the UK competition.

Katya Jones was born on 12 May 1989. At present, she is 32 years young star. Likewise, her birthplace is Leningrad, Russian SFSR, Soviet Union.

Katya is the daughter of her father, Andrey Sokolov whereas her mother is Tatiana Kim.

Talking about her nationality, Jones holds a Russian identity whereas her ethnicity is Russian, Korean.

Regarding education, the dancer might be well-educated. She began dancing at the age of six and trained in gymnastics as well as Ballroom and Latin-American dancing.

Katya featured in 2016 in the BBC ballroom dancing show, Strictly Come Dancing for its fourteenth series. She was associated with former Shadow Chancellor, Ed Balls. Later, she partnered with Holby city actor, Joe McFadden and the couple eventually won the series.

Moreover, Jones participated in the show along with her partner, comedian Seann Walsh. The dancer also featured in the eighteenth series and became part of the show’s first same-sex duo with a veteran boxer, Nicola Adams. Sadly, they drew out from the competition on 12 November after Jones tested positive for COVID-19.

The star has participated in the national Strictly Come Dancing-The Live Tour in 2017. Freshly, Katya mentioned she would be performing with Neil Jones at Donahey’s Dancing with The Stars Weekends in 2022.

Other than that, Jones has appeared on CBBC”s Saturday Mash-Up where she was ‘super slimed’ being covered in 20 buckets of gunge after being voted by the viewers.

A famed Russian dancer, Jones has earned a handsome amount of money from her profession. She lives a lavish lifestyle along with her family.

Katya has never been part of any controversial matter or rumors till now. The star has been preoccupied with her professional and private life.

It seems that Jones prefers enjoying her personal life and does not want to merge it with her professional life.

32 years young star, Katya has beautiful looks and an admirable personality. She stands at a height of 5feet 5inches. Also, she has a balanced body weight of 55 kg.

Furthermore, Jones has dark brown eyes whereas her hair is brown. Her body measurement is 34-26-35 inches(chest-waist-hip) respectively.

Regarding her social media presence, Katya Jones is an active personality on social media. Katya has more than 201k followers on her official Instagram account @katyajones.

She is also active on Twitter with around 84.4k followers.

However, Jones is not available on Facebook at the moment.

Katya Jones: What is her reaction to the new relationship of her ex-husband Neil Jones with girlfriend Luisa Eusse!