Kawhi Leonard is an American professional basketball player. He now plays for the Los Angeles Clippers. He is in a relationship. 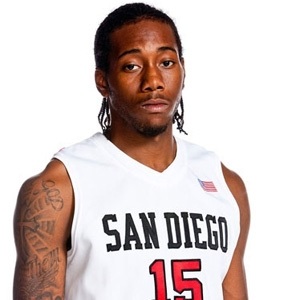 Kawhi Leonard is in a committed relationship with Kishele Shipley. They are together since 2014. In 2015, his wife became pregnant and they have one beautiful daughter born on 10 July 2016.

His baby’s name is Kaliyah Leonard. But on his daughter’s first birthday, his fan had uploaded a video of him celebrating the birthday.

In March 2019, this lovely couple has welcomed their another child, a son.

Talking about his past relationship there is no information about the love affair of Kawhi.

Who is Kawhi Leonard?

Kawhi Leonard is an American professional basketball player for the Los Angeles Clippers of the National Basketball Association.

Leonard won an NBA championship with the Spurs in 2014 and was named the NBA Finals Most Valuable Player. He is a two-time NBA Defensive Player of the Year, having won in 2015 and 2016.

Kawhi Leonard was born on June 29, 1991, in Los Angeles, California, United States. Currently, he is 30 years old. His nationality is American and his ethnicity is Afro-American.

His father’s name is Mark Leonard and his mother’s name is Kim Robertson. Regarding siblings, his sister’s name is Miesha Slayton Kawhi Leonard is one of the most professional names in the world of basketball.

He has attended Canyon Spring High School. Later, he transferred to Martin Luther King High School in his junior year. He has had a good basketball average throughout his high school career. He attended San Diego State University in 2009.

Kawhi Leonard started his professional career in 2011; however, he was selected by Indiana Pacers but later traded to San Antonio Spurs. He is the winner of California Mr. Basketball. He signed a multi-year contract with San Antonio on December 10, 2011. On July 18, 2018, Leonard was traded to Toronto Raptors.

At present, he plays for another team named the Los Angeles Clippers.

Kawhi Leonard earned numerous awards and rewards.NBA forward was named NBA Finals MVP after leading the San Antonio Spurs to an NBA Championship in 2014. He played two seasons of college basketball at San Diego State University before being selected with the 15th overall pick in the 2011 NBA draft by the Indiana Pacers.

Kawhi was selected for his first NBA All-Star Game in 2016. He was also an NBA All-Rookie First Team selection in 2012 and the NBA’s Defensive Player of the Year in 2015 and 2016. In Leonard’s sophomore season, he averaged 15.7 points and 10.4 rebounds as the Aztecs finished with a 34-3 record and won back-to-back conference tournament championships.

He is receiving a fortune amount of income and his salary is $40 million USD and his net worth is around $80 million.

Currently, there are no rumors that spread in the air about their marriage. However, in the future, they knotted a legal connection. He never connected with any controversy.

Kawhi Leonard has a height of 6 feet 7 inches. His body weighs 104kg. He has black hair and black eyes.