Kay Cannon is a married woman. She is happily living a married life with Eben Russell. The couple tied the knot on 1 January 2012 and are together since then.

They are blessed with a baby girl named Evelyn Rose Russell born on 9 October 2013.

Previously, the director was in a married relationship with Jason Sudeikis. Sudeikis is a well-recognized American comedian, actor, screenwriter, and producer. The ex-couple married on 26 June 2004.

They remained together for 5 years before separating on 4 March 2010. 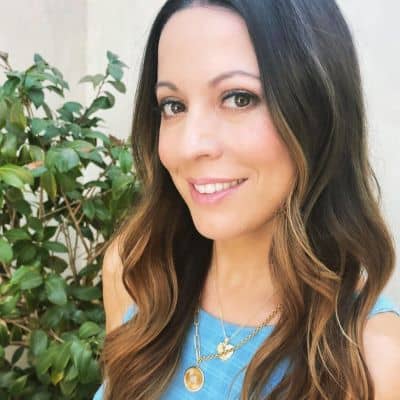 Who is Kay Cannon?

Kay Cannon was born on 22 August 1974. At present, her age is 48 years old. Likewise, her birthplace is Illinois, the USA.

Kay is the daughter of her father, John M. Cannon whereas her mother is Rosemary Cannon. Moreover, she has six siblings named Paul, Vince, Matt, and Luke(brothers), and two sisters(Stacie and Mary).

Talking about her nationality, Cannon holds an American identity whereas her ethnicity is unknown.

Regarding education, the writer completed her graduation from Reed-Custer High School in Braidwood, Illinois. Later, she took her BA in theatre and MA in Education at Lewis University in Romeoville, Illinois.

Kay is a multi-talented personality. She is an actor, writer, director, and producer. Cannon started her acting career as a performer at Comedy Sportz.

She has also performed sketch and improv for theaters which consist of Boom Chicago in Amsterdam, Netherlands, The Second City in Chicago and Las Vegas, and so on.

Cannon in advance made a cameo in Pitch Perfect 2 in 2015 and also featured in the comedy, How to be Single(2016). Talking about her writing career, Kay won the Writers Guild of American Award for Best Comedic Series for her work on 20 Rock thrice.

Additionally, the star was nominated for an Emmy Award for an Outstanding Writing in a Comedy Series. Kay also worked as a co-producer on the feature film, Baby Mama in 2008.

She became the executive producer of the show Girlboss for Netflix based on the real life of Sophia Amoruso.

As a director, the superstar directed Blockers which was released by Universal Pictures on 6 April 2018.

A famed multi-talented personality, Cannon has earned a handsome amount of money from her profession. She lives a luxurious lifestyle with her family.

It is reported that Kay Cannon has an estimated net worth of $10 million.

However, the renowned director has not disclosed her exact salary, earnings, and assets details till now.

Kay has never been part of any controversial matter or rumors till now. The star personality has been preoccupied with her professional and private life.

It seems that Cannon prefers enjoying her personal life and does not want to merge it with her professional life.

48 years old star, Kay has beautiful looks and an admirable personality. She stands at a height of 5feet 4inches. Also, she has a balanced body weight of 54 kg.

Furthermore, Cannon has hazel eyes whereas her hair is brunette. She wears a shoe size of 9(US).

Her body measurement is 34-27-34 inches(chest-waist-hip) respectively.

Regarding her social media presence, Kay Cannon is an active personality on social media. Kay has more than 34.5k followers on her official Instagram account @kaykaycannon.

She is also active on Twitter with around 60k followers.

Moreover, Cannon is also available on Facebook at the moment.