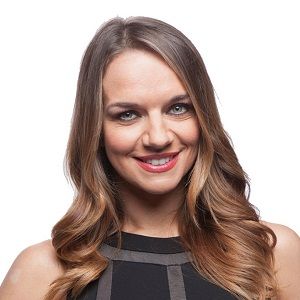 Kay Murray is an unmarried woman. So far, she has not seen anyone. Furthermore, there are no rumors of her affairs, boyfriend, and marital life.

It seems she has more focus on her work rather than on relationship stuff. In addition, Kay doesn’t speak about her personal life in the public and media. Currently, Kay is single.

Who is Kay Murray?

Kay Murray is a sports presenter from England. She became famous after appearing in the show called European soccer. In addition, Kay also worked for the official channel of Real Madrid named Real Madrid TV.

She was born on September 10, 1980, in Middlesbrough, United Kingdom. As a child, she grew up in her hometown alongside her family. Her ethnicity is English.

Details about her father, mother, and siblings are not disclosed.

Talking about his childhood, she had a keen interest in football. Concerning her education, Kay completed her graduation in journalism in Farringdon, England.

Kay Murray began his career in 2013 with the beIN North American sports network. Furthermore, she has also worked for the Astro TV network’s program called FourFourTwo Eurozone as a Spanish Football Correspondent.

In addition, she started to c0-host the FIFA Ballon d’Or awards ceremony from the year 2011 alongside Ruud Gullit. She worked there for two years.

Apart from that, Kay has also served in the FIFA Interactive World Cup show from 2013 to 2015. Prior to working as a reporter for Real Madrid TV, she has worked as off behind scenes editing, cutting, and writing.

However, after several months Kay has been promoted to a TV reporter.

In addition, she has also interviewed some of the big names such as Jose Mourinho and Cristiano Ronaldo on her show named Extra Time.

This reporter’s net worth is estimated at around $1-$5 million. Moreover, her salary as a journalist is around $38k per year.

So far, there are not any drastic rumors regarding her personal and professional life. Furthermore, she has not been dragged into any controversy yet.

There is no information regarding Kay Murray’s height and weight. Furthermore, her hair color is light brown and eye color is hazel brown.