Best known for her roles as Jenny Garrison in the 2009 reboot of Fame, Debbie Berwick on Phil of the Future, and Nikki Westerly on Summerland. 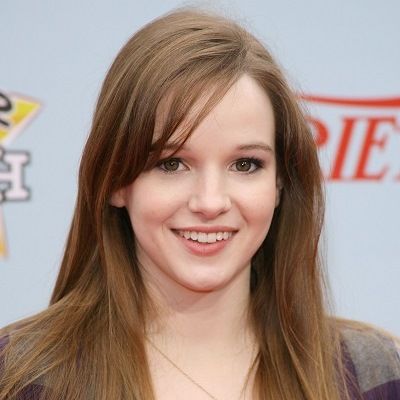 I spend so much time with my parents. My mom and I were joined at the hip for five years. There was not one moment when I wasn't with her.

My whole thing is I want to have a backup plan because maybe I won't get another acting job after 'Fame', maybe I'll want to give up on acting in five years or whatever and I want to have something else that I enjoy just as much as I enjoy acting.

I've actually always wanted to be able to read people's minds. My sister did a movie with super-powers and that's the one I would have wanted, so I really lucked out. The negative is that people are really cruel in their own minds, but you can weed out the bad people from the good people, and then just hang out with the good people.

What is the relationship of Kay Panabaker?

Kay Panabaker is known to have dated an actor Chad Broskey but is now single. She does not have a long dating history. She is not seen with many men in public.

Who is Kay Panabaker?

Kay Panabaker is an American zoologist and former actress. She is best known for her roles as Jenny Garrison in the 2009 reboot of Fame, Debbie Berwick on Phil of the Future, and Nikki Westerly on Summerland.

Talking about Kay’s education, she attended Crone Middle School. From a small age, she began acting at various community theaters. She was exceptional at studies as well.

Kay graduated from high school at the age of 13 as a valedictorian. Then, she went on to attend Glendale Community College after receiving two scholarships.

Talking about her profession, Kay Panabaker has guest-starred in several television dramas and soap operas. She also portrayed Alice Brand in 7th Heaven, Melissa Rue in ER, Sara in Port Charles, Carrie Bauer in The Brothers García, Ellisha in Medium, and Lindsey Willows in CSI: Crime Scene Investigation, to name a few.

In the film, she appeared in Dead Heat as Sam LaRoche; and did some voice work in the Disney/Pixar film, Monsters, Inc.

Additionally, Panabaker’s breakout role came when she starred in The WB’s Summerland as Nikki Westerly, in the 2004–05 season. She also appeared as George in the 2007Nancy Drew: The Mystery in Hollywood Hills alongside Emma Roberts and Amy Bruckner.

In fact, she starred in Life Is Ruff as Emily Watson alongside Kyle Massey and Mitchel Musso.  In the year 2006, Panabaker was in the first Disney Channel Games, on the Red Team with Zac Efron, Anneliese van der Pol, Moises Arias, Dylan Sprouse, and as well as with Shin Koyamada as part of the Disney Channel’s So Hot Summer!. Movies include Moondance Alexander and The Prince and the Pauper with Dylan and Cole Sprouse.

Whereas, Panabaker starred in the remake of Fame as Jenny, an actress; the film was released in theaters on September 25, 2009. She also played the teenaged Kitty Walker on Brothers and Sisters.

Likewise, Panabaker starred in the ABC sci-fi drama series No Ordinary Family, which ran for a single season ending in 2011 after 20 episodes. In 2011, Panabaker played Samantha Caldone in the ABC Family movie Cyberbully.

Then, after playing Rosa in Beverly Hills Chihuahua 3: Viva la Fiesta in 2012, Panabaker retired from acting. She eventually went on to study zoology at UCLA. As of 2016, she works as an animal keeper at Disney’s Animal Kingdom.

She won Outstanding Actor/Actress in a Motion Picture for Moondance Alexander (2007) at Festival Prize. Then, she won Best Ensemble Acting for The Lake Effect (2010) at Copper Wing Award.

She has an estimated net worth of around $1 million (as per 2022 data) and she has earned that sum of money from her professional career.

There was a rumor about Panabaker’s death. Currently, she is far from rumors and controversies.

Kay Panabaker has a height of 5 feet. Additionally, she weighs 54Kg. In addition, she has a measurement of 32-24-34 inches and her bra size is 32B.

Kay’s hair color is light brown and her eye color is hazel. Furthermore, her dress size is unknown and her shoe size is 7.5 (US).

Being an American actress, Kay has a huge fan following rate. She has around 46.6K followers on her Twitter. But, she doesn’t have an official page on Facebook and Instagram.