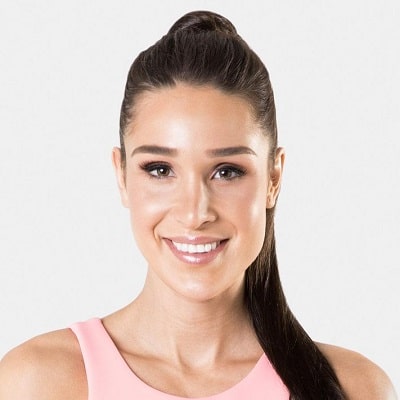 Kayla Itsines is currently in a relationship. She is romantically living with her longtime boyfriend and now business partner Tobi Pearce whose real name is Tobias “Tobi” Pearce. The couple got engaged in April 2018. There is no information when the couple first met and where did they date.

According to some sources, they first met at the gym and fell in love. At that time, Tobi was studying to garner double-degree in personal trainer course as well as Law and Commerce.

The couple is blessed with a baby girl on May 2019. The family is currently living together and there is no sign of divorce between the couple.

Who Is Kayla Itsines?

Kayla Itsines is a famous Australian personal trainer, an author and is also one of the 30 influential people on social media according to Time in March 2016. In addition, she has launched ebooks titled Bikini Body Guides and workout app, Sweat with Kayla.

She was born in the city of Adelaide, South Australia on 21st May 1991. Kayla is born to mother Anna and father Jim Itsines. Her family heritage is of Greek descent. Moreover, she was raised by her parent along with sibling sister, Leah Itsines. Her sister is a food stylist and a personal trainer.

Kayla holds Australian citizenship but her ethnicity is unknown.

She attended the Australian Institute of Fitness at the age of 18 in order to become a Master Trainer.

Kayla Itsines began working at a woman’s gym in Adelaide. Then, she changed her machine exercised to a routine of aerobic exercise. Also, she trained her sister’s friends in order to make their core strength and powerful legs to play Netball.

Kayla promoted her career through her Instagram account also. She shared a picture of her clients taken before and after their progress in the body.

She along with her partner, Tobi founded the Bikini Body Training Company in March 2013 where she became a director and her partner became a CEO.

Moreover, she related her fitness App, Sweat With Kayla in November 2015 and published her first print book, The Bikini Body 28-Day Eating an Lifestyle Guide on November 2016.

Later, she released her second book titled ‘The Bikini Body Motivation & Habits Guide’ in November 2017. Currently, she is continuing her personal training to her long-term clients as well as her staffs.

It seems Kayla has not been awarded and nominated for her works till date.

She has an estimated net worth of around $63 million and she has accumulated that sum of money from her professional career. Moreover, she earns around $8 million per year as her salary.  Also, her partner Tobi’s net worth is estimated at $46 million.

It seems Kayla has not been involved in any rumors and controversies in her personal and professional life.

Kayla Itsines stands a height of 5 feet 5 inches and weighs 52 kilos. Her body measurement is 34-24-35 and her bra size is 32B. In addition, she has olive skin, brown hair and brown eye.