Actress Kaylee DeFer is married and a mother of two.

Kaylee DeFer has been in a relationship with the lead vocalist for the band Fitz and the Tantrums, Michael Fitzpatrick.

In May 2013, they announced that they were expecting their first child. They welcomed their first son, Theodore Ignatius on September 20, 2013.

After two years of their first son, the couple got married on July 25, 2015. Then, on April 11, 2017, the couple welcomed their second son, Sebastian Danger. The family is living together happily and there is no sign of divorce between the couple.

Previously, she called off her engagement to Mike Pereria, who was a jewelry designer. They dated since 2002 and got separated in January 2012 after a long period of their relationship. 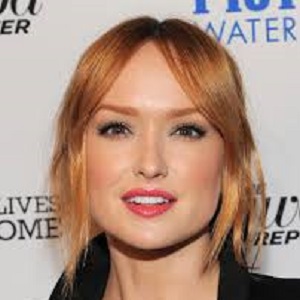 Who is Kaylee DeFer?

Kaylee DeFer is a popular American actress. She is famous for her role as Ivy Dickens in The CW’s teen drama series ‘Gossip Girl’. She is also well recognized for her guest roles on ‘How I Met Your Mother’, ‘Bones’, and ‘CSI: Miami’.

She has not disclosed information regarding her parents, siblings, and her childhood.

There is no information available regarding Kaylee’s education history.

She debuted her acting career from the episode of the Nickelodeon sitcom ‘Drake & Josh’ in March 2004. After that, she has made several guest appearances in the shows which include ‘Quintuplets’, ‘CSI: Miami’, ‘How I Met Your Mother’, etc. She has also made her appearance on the cover of Reeve Oliver’s second album ‘Touchtone Inferno’ in 2007.

She portrayed the character, Scarlet, on The WB’s drama series ‘The Mountain’ in May 2004. The series premiered on September 22, 2004, and follows the personal lives of the staff and friends at a remote ski resort but the series was canceled after four months.

She portrayed the role of teenager Hillary Gold on the FOX sitcom ‘The War at Home’ in April 2005. The series could not go so far as it collected negative comments from the viewers.

She auditioned for the role of Raina Thorpe but got the role of the character of Ivy Dickens in the fourth and fifth seasons of ‘Gossip Girl. Later, she reunited with ‘The Mountain’ castmate Penn Badgley and reprised her role of Ivy in the sixth and final season of the series. Kaylee was listed as a main cast member of the series.

She announced the break from her acting career in May 2013, after she gave it to her first son.

She has an estimated net worth of around $800,000 as of 2022, and her main source of income is from her professional career.

She has not been in any types of rumors, scandals, and controversies in her professional career and in her private life.

She has a height of 5 ft. 6 inches and she weighs 59 kg. Kaylee has got light brown hair and dark brown eyes. Her body measurement is 32-26-33 inches.