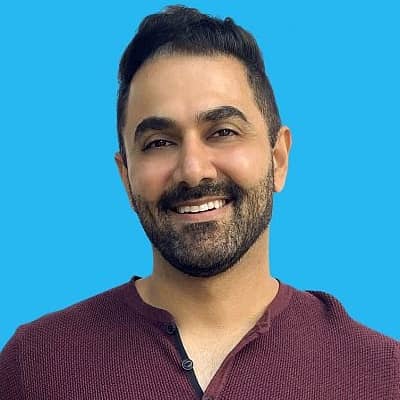 He is married to Haseena Qudrat. The couple also has children but the information regarding them is not revealed.

He also has a different post on hos social media account with his wife. The couple is living a happy life together.

Who is Kaysar Ridha?

Kaysar Ridha is an actor and a reality star who is best known for first appearing in Big Brother season 6. Late, he returned to the show, Big Brother All-Stars.

He is now vice-president of digital products for Evolus.

His family immigrated to the United States when he was still young and settled in California. Though the names of his father and mother are not available.

He holds an American nationality and is of Arabic and Persian ethnicity.

He completed his schooling from a local school in his hometown. Further, he graduated with a bachelor’s degree in economics from the University of California Irvine.

Kaysar Ridha builds his career in an acting field before joining the reality show. He has appeared in The Young and the Restless (1973), Half & Half (2002), and Entertainment Tonight (1981).

Kaysar is famous for being a contestant of Big Brother season 6, He later returns on Big Brother 22 as a houseguest. He was a partner of Michael Donnellan in the Big Brother 6 House. On Day 33, he was evicted though, after a fan vote, he was returned to the game on Day 40 following Sarah Hrejsa’s eviction.

Ridha later returned for Big Brother 7th season. He gets evicted in a 5 to 1 vote in 10th position. He was the first Muslim contestant to participate in Big Brother.

So being the first Muslim contestant on Big Brother, they installed bidets on the toilets in the house especially for him. As Muslims have specific hygiene practices that must be followed, they had maintained it in the show. Further, Kaysar is also a board member for the Muslim Coalition for America.

Kaysar ranks at no.2 in Reality Blurred’s Sexiest Reality Stars of 2006 competition. Likely, he was also at 4 of Reality TV’s 25 Most Fascinating Stars by Reality News Online. Later on, he appeared as a guest in the shows like The Early Show, Live with Kelly and Michael, and Reality Obsessed.

Before he came to the limelight, he worked as a graphic designer in Irvine, California. He learns about photoshop and eventually transitioned it into doing more work in the tech space. He has worked in several fields of graphic design, product design, UX instructor, and many more.

In 2016, Ridha co-founded an internet company based out of Dubai. He currently works as the vice-president of digital products for Evolus and apparently has been in this job for the last two years now.

Kaysar has an approximate net worth of around $1 million.

His source of income is from his leading roles in the entertainment industry and also from his graphics designing career.

As of now, he has maintained his dignity as a successful actor. Till the date, he has not been through any sort of controversy and rumors.

Kaysar Ridha stands with a height of 6 ft 2 inches and has a decent weight. He has dark brown colored hair and black eyes.