Kealia Ohai is an American Soccer Player who plays for the Women's national soccer team. Kealia is in a relationship with the NFL's Houston Texans, J. J. Watt.

Kealia Ohai is currently dating J. J. Watt of the NFL’s Houston Texans and a teammate of her brother-in-law Brian Cushing. The two met through Kealia’s sister Megan.

The pair recently confirmed their relationship. Kealia admitted on the 2 Up Front podcasts, that she and Watt are indeed dating. 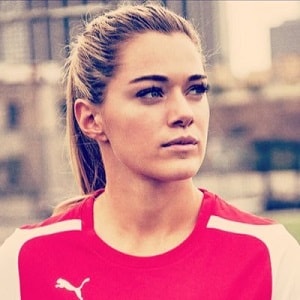 My depth perception is pretty off. A lot of people would say they don’t like to drive with me at nighttime because at night it’s pretty bad. But it’s nothing like I’m tripping over things. I think because I was so young when it happened, I kind of figured out how to live with it.

Who is Kealia Ohai?

Kealia Ohai is an American soccer player. Currently, she captains the Houston Dash and is also a member of the United States women’s national soccer team. Previously, she was started with Tar Heels from 2010 to 2013.

Kealia was born in Draper, Utah on January 31, 1992, as the daughter of Ben and Cindy Ohai of Nigerian ancestry. Throughout her childhood, she was raised in Draper, Utah.

She has a sister, Megan who is a former youth national team member who played soccer at USC where she won the 2007 NCAA championship.

Additionally, her father named her after Kealia Beach on the island of Kauai.  She is of American nationality.

Talking about her education, Kealia graduated from Alta High School in June 2010. There, she was a four-year varsity soccer player at the school.

Furthermore, she also earned Parade All-American honors in June 2010. Later, she graduated from the University of North Carolina.

Kealia was a four-year starter with the Tar Heels from 2010 to 2013. Additionally, she also became a member of the 2012 championship-winning team.

In the tournament, she scored the game-winning goal during overtime in the semi-final. Later, she became named to the First-Team All-Atlantic Coast Conference (ACC) and ACC All-Freshman Team. Next, she led the team in scoring with 14 goals and started 22 of the team’s 24 games.

Kealia’s career took off after she became selected as the second overall pick in the 2014 NWSL College Draft by the Houston Dash as the expansion team’s very first college draft pick.

Eventually, she became the club’s captain midway through the 2016 season. Furthermore, Kealia has also played with the under-15, under-17, under-18, under-20, and the under-23 national teams.

She won the 2012 FIFA U-20 Women’s World Cup and scored the game-winning goal in the 44th minute of the final to lead the U.S. to victory over Germany.

She made her international debut for the senior team on October 23, 2016.

Kealia has not revealed her current salary. In addition, there is an estimated net worth of $1 million at present.

There was a rumor that suggested that Kealia will miss the remainder of the current season due to an ACL tear.

This rumor turned out to be true. Additionally, she has not been part of any notable controversies in her career.

In the second half of Houston’s 2-0 victory over the Orlando Pride, Kealia had a Non-contact knee injury in her left knee. Hence, after the medical examination, she decided to be out for the season.

Talking about her body measurement, Kealia has a height of 5 feet 5 inches (1.65 m). Her hair color is blonde and her eye color is hazel.

Kealia is quite active on social media. She has a huge number of followers on social networking sites such as Facebook, Twitter as well as Instagram. She has more than 28K followers on Twitter.

Also get to know more about the birth facts, education, career, net worth, rumors, height, and social media of different personalities like Servando Carrasco, Sydney Leroux, and Megan Rapinoe.