The Matrix starrer, Keanu Reeves has had highs in the Hollywood industry. Despite being so successful careerwise, Keanu has had heartbreaks in his relationships and has dated Hollywood actresses.

In 1986, Keanu dated Jill Schoelen while working in the movie Babes in Toyland. But after three years, they broke up and Jill hooked up with Brad Pitt.

He began going out with Sofia Coppola and Sandra Bullock in 1992 and 1993 respectively.

One of the tough relationships of Keanu was with Jennifer Syme. The pair hooked up in 1998 and also gave birth to a baby girl named Ava Archer Syme-Reeves. The heartbreak moment came when the couple split up and Syme was killed in an accident in 2001.

In addition, the Matrix star has also affairs with Lynn Collins, Diane Keaton, Hallie Meyers-Shyer, and Winona Ryder for a short period of time.

In 2009, Keanu was spotted with Hollywood sensation Cameron Diaz. Although the couple separated soon.

However, they couldn’t carry on their love life too long and split up within a year.

Recently, there was also a rumor that Keanu has a relationship with Jamie Clayton in 2015, however, the pair didn’t confirm their relationship.

As per the reports, Keanu is currently dating  Alexandra Grant. In November 2019, the two came out publicly as a couple and actually started dating in the summer of 2017. 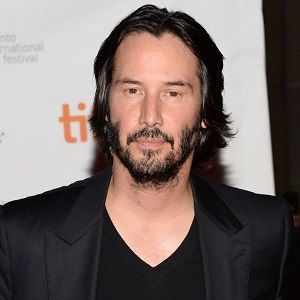 Falling in love and having a relationship are two different things

Money doesn't mean anything to me. I've made a lot of money, but I want to enjoy life and not stress myself building my bank account. I give lots away and live simply, mostly out of a suitcase in hotels. We all know that good health is much more important

I am not handsome or sexy. Of course, it's not like I am hopeless.

Who is Keanu Reeves?

Keanu Reeves is an actor, producer, director, and musician from Canada.

He became famous after appearing in the movie Bill and Ted franchise from 1989 to 1991. In addition, Keanu came into the spotlight after appearing in some hugely successful movies such as Point Break, Speed, Constantine, The Matrix, and much more.

He is working in the Hollywood industry for three decades.

Keanu Reeves was born on September 2, 1964, in Beirut, Lebanon. He is the son of Patricia Taylor, mother, and Samuel Nowlin Reeves, Jr., father.

His nationality is Canadian-American and his ethnicity is a mix of Native Hawaiian, Portuguese, English, Scottish, Chinese, and Dutch.

Furthermore, his mother was a British costume designer from Essex. Keanu’s childhood was pretty tough as his father was jailed in Hawaii for selling heroin at Hilo International Airport. At the age of three, Keanu and his mother were left alone by his father.

Moreover, Keanu and his mother shifted to Sydney after the divorce and later to New York City. In addition, he spent his childhood with his stepfathers.

In the span of five years, Keanu enrolled in four high schools.

As a student of Etobicoke School of the Arts, he was restricted because of his rude behavior. As a child, he was more forward in sports rather than in academics.

Keanu Reeves started his acting career at the early age of nine in a theater production. He has also worked for the Canadian Broadcasting Corporation TV youth program Going Great as a correspondent.

Apart from his acting career, Keanu also became the bass guitarist in the grunge band Dogstar. Furthermore, his breakthrough moment arrived in the action-thriller movie Point Break followed by another action movie Speed in 1994.

Besides his successful run, Keanu’s struggling days came with high-budget movies such as Johnny Mnemonic and Chain Reaction which were the huge flop. Although, he again came into the limelight with the 1999 science fiction-action hit The Matrix.

In The Matrix, Keanu played a tremendous role and he also gained perfect reviews. In 2006, his romantic chemistry with Sandra Bullock also gained positive reviews from the critics and also became a huge success at the box office.

Moreover, Keanu Reeves made his directorial and pre-production debut in Man of Tai Chi in 2008.

In 2014, he starred in the action thriller movie John Wick followed by its sequel John Wick: Chapter 2 in 2017.

Recently, he has also featured in a couple of movies such as To the Bone and Replicas. Apart from the movie, Keanu has also appeared in several TV shows such as Swedish Dicks, Easy to Assemble, Babes in Toyland, and much more.

Moreover, the Hollywood hunk has also grabbed MTV Movie Award for Most Desirable Male in 1992 for Point Break.

With all his various roles in big hit movies, Keanu has earned a massive amount of money. As a successful star, he is one of the highest-paid actors in Hollywood.

Tall and dashing Keanu Reeves has a towering height of 6 ft 1 inch and weighs 84 kg.

Furthermore, he has gorgeous brown eyes and black hair. He has a perfect body with 43 inches chest, 14 inches of biceps, and 35 inches waist.

Also, read the affair, salary, net worth, controversy, and the bio of Munro Chambers, Russ Mayfield, and Kidada Jones.