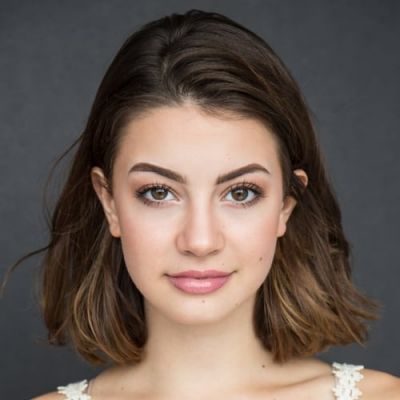 Who Is Keara Graves Married To?

Keara Graves, a proud member of the LGBTQ community, is in a marital relationship with her long-term girlfriend, Lauren Rice.

On November 19, 2020, they walked down the aisle and exchanged marital vows. Apart from this, there is no further info about their relationship.

But looking at Graves’s social media post, the couple seems to be very happy together.

Who is Keara Graves?

Keara Graves aka Keara Kristen Graves is a known Canadian, actor, YouTuber, and singer. She soared to fame after appearing as Leia in the Family Channel musical series titled, Lost & Found Music Studios.

She is also popularly known for her roles in series like Grand Army, Cardinal Spinning Out, and The Price of Perfection (2022).

Keara was born to her father, Steve Graves, a former NHL player, and mother, Kathryn Greco. She also has an older sister named, Alexandra “Alexa”.

Moving on to her educational life, she went to Roman Catholic Secondary School along with her older sister.

Briefing on her career life, Keara made her acting debut by appearing in a kid role in the children’s tv series, The Doodlebops in 2005.

Then she went on to work on various series like Designated Survivor, Wayne, Deadly Influencer, The Cheerleader Escort, Spinning Out, Cardinal and others.

In 2020, Keara appeared in the role of Grace in the teen drama series, Grand Army which aired its first season on October 16, 2020. It is based on Katie’s play, Slut: The Play. However, after one season the series was canceled in June 2021.

Apart from series, she has also worked on short films like Night Drive, Weenie, and Violet Skies.

In 2022, Graves has been cast in the television film, The Price of Perfection as Ava.

Keara seems to make a good fortune as an actress and Youtuber. By the 2022 reports, Graves’s net worth is estimated to be around $400 thousand.

Keara Graves is not linked to any rumors or controversies. She always avoids the media and situations that could jeopardize her professional acting career.

Therefore, Graves has successfully balanced her personal and professional lives.

Keara Graves has a slim and attractive figure, standing at 5 feet 4 inches tall and weighing 55 kilograms. Her body measurements are yet to be revealed on the internet.

This cast of the 2020 drama series, Grand Army‘s eyes are brown, her skin is white, and her hair is dark brown, according to her outward appearance. Her normal dress size is 5 and her shoe size is 7. (US).

Talking about her sexuality, she is queer, gender fluid, and pronouns herself as they/she.

Keara Graves is very active and popular on social media platforms. She owns an Instagram account under the username, @kearagraves, where she is followed by nearly, 150K people.

In addition, her Twitter account is enriched with over 10.6K followers. She is also active on TikTok, where she is followed by more than 144.7K people.

On the other side, her YouTube channel, Keara Graves has garnered about 511K subscribers.