Previously, Keeley Hazell was romantically connected to Jason Sudeikis, an American actor, comedian, producer, and writer. In June 2021, they were spotted cozying up in NYC. They both appeared in the film”Ted Lasso,”

However, recently on May 18, the pair called it quits after nearly a year of dating. They have not cited the reason for their split. Currently, she is single and living a peaceful life. 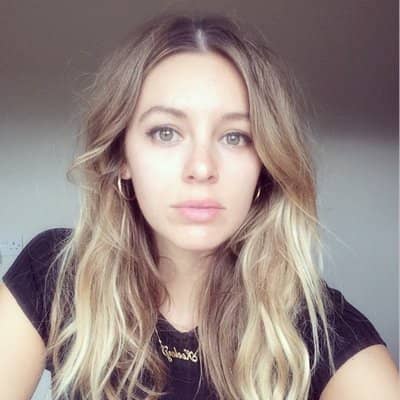 Who is Keeley Hazell?

Keeley Hazell is an English fashion model and actress. She is also known for her intense beauty and angelic charm. Hazell is a former Page 3 girl who has graced the cover of several top magazines. She recently appeared in the tv series, Ted Lasso.

She was born to a mother Amber, a dinner lady, and a father Roy, a window fitter. Her parents split up when she was 13 years old. Likewise, she grew up in Grove Park, South East London, England.

Her colleagues persuaded her to do modeling and she grew up dreaming of being a model. At the age of 17, she started competing in several modeling competitions.

She holds an English nationality. Her birth sign is Virgo.

Talking about her education, she attended the Ravensbourne School in Bromley but dropped out of school to work as a hairdresser at the age of 16. Later, she studied fashion at Lewisham College.

Keeley is recognized for her intense beauty and charm. After knowing about The Sun’s Page 3 Idol competition from a friend, she submitted some photos immediately. Obviously, Keeley the beauty won the competition and had a one-year exclusive glamour modeling contract with The Sun.

Furthermore, she has graced the cover of several magazines like FHM, Loaded, Nuts, and Zoo Weekly. She has endorsed various brands and companies. Moreover, In 2008, she and agent Ginny Mettrick co-founded a modeling agency, Muse Management.

Apart from modeling, she is also an Actress. She made her appearances in various films and tv series such as Like Crazy, How to Stop Being a Loser, Happily Divorced, The Beauty Inside, Mr. Hollywood, The Royals, Deadly Matrimony, and Ted Lasso among others.

Currently, she is represented by Gersh, a talent and literary agency. It is the fourth largest talent agency in the United States.

To name a few prestigious awards of her, it is mentioned below;

Speaking of her income, she makes a decent sum of money and her earnings are impressive. She has an estimated net worth of around $5M.

She is one of the most successful people in America who gained huge fame and wealth from her modeling career. Currently, she is living a lavish life on her own. Similarly, she has endorsed or promoted various brands.

Hazell has a decent height of 5 feet 7 inches. Her weight is 56 kilograms. Similarly, she has got a beautiful pair of large hazel-green eyes and blonde hair.