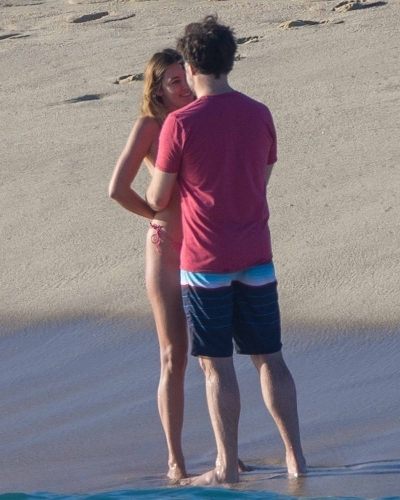 There is definitely something cooking between Keeley Hazell and Jason Sudeikis. They are giving their relationship another shot after being spotted spending time together. A source revealed that they are casually seeing each other again but there is no anything serious going on at present. The source added,

Keeley and Jason were previously linked with each other back in February 2021. Likewise, in July of the same year, they were canoodling while strolling around NYC. During that time they were said to be dating for a little while and nothing was serious. They remained lowkey for several months before being spotted again in September on a hike in Los Angeles.

Sources claimed that there was nothing romantic going on. But things turned a romantic turn when they were caught kissing on a beach in Cabos San Lucas, Mexico on 22nd November 2021. Jason was seen putting his arms around the beautiful model as she looked up at him for a little smooch.

Keeley can be seen wearing a tiny pink bikini while Jason rocked a casual red T-shirt and blue swim trunks.

Jason Sudeikis is an American comedian, actor, screenwriter, and producer, who is most talented and energetic in his field. He was hired as a sketch writer on Saturday Night Live and was a cast member. He has also appeared on the popular television shows named 30 rocks, son of Zorn, etc. Read more bio…

Tori Spelling and Dean McDermott are getting a divorce after 15 years of marriage!
Tags : Actress Model