Posted by MarriedBiography Posted on April 23, 2021 | In Dating , Net Worth , Sexuality
Share this 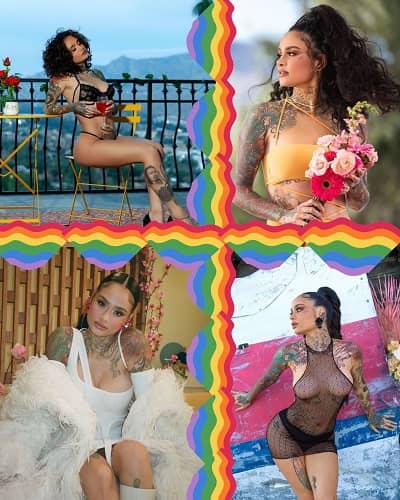 Kehlani has come out as a lesbian (Source: Instagram)

Kehlani has finally labeled her sexuality!

American singer Kehlani has identified herself as a lesbian after coming out as queer and bisexual previously. She disclosed her new sexuality on a TikTok video posted on 22nd April 2021. She said in that video,

Her family was cool about it as they already knew about it. Kehlani uses the pronoun ‘she/they’. Previously, she talked about her sexuality in a deleted tweet,

“I felt gay always insisted there was still a line drawn as to which ‘label’ of human I was attracted when I really just be walking around thinking ERRYBODY FINE.”

Kehlani had kept her sexuality a secret to her family at the time. At the same time, she had also said in a video that she was a lesbian. Earlier in April 2021, she posted a short Instagram live video where she confessed to being a lesbian before coming to the TikTok video.

Who is Kehlani dating now?

Kehlani’s recent coming out has indicated her relationship with SZA. They were spotted holding hands while coming out of restaurants in LA which sparked the dating speculations. On 22nd April 2021, Lizzo posted Instagram stories where the trio went to the West Hollywood restaurant. It is not known whether it is just their friendship or something else is cooking behind.

Likewise, she has a daughter Adeya Nomi Young-White born on 25th March 2019 from her relationship with her ex-boyfriend Javie Young-White.

Kehlani has an estimated net worth of $3 million as per Celebrity Net Worth. She has worked with record labels like Tsunami Mob, Atlantic, and HBK. On 27th January 2017, she released her first album titled SweetSexySavage. Likewise, on 8th May 2020, Kehlani released another album titled, It Was Good Until It Wasn’t.

As a lead singer, she has worked in Birthday, Can I, Good Thing, Nights Like This, Honey, Good Life, Gangsta, Crzy, Touch, Already Won, and more.

Also read Beautiful Journey Of Jamie Raines And His Fiance Shabba Lotun! From Jamie Coming Out As Transgender To Engaged!

Kehlani Ashley Parrish is a singer, songwriter, and actress from America. Originally from Oakland, California, she got original notoriety as a part of the Poplyfe teenage band.

Her first business mixtape, Cloud 19, published in 2014. Kehlani’s commercial mixtape, You Should Be Here got debuted at number 5 on the R&B Hip Hop Chart. Read more bio…

Karol G and Anuel AA are not together anymore! Why did they break-up?
Tags : Cloud 19 Singer