Keira Walsh is a professional English footballer. Keira plays as a midfielder for Manchester City of the WSL. She is currently single.

She has a good bond with her co-players, family, and friends.

Some sites claim that Keira’s physical orientation is gay and she is in a relationship with former teammate, Lucia Roberta Tough Bronze. 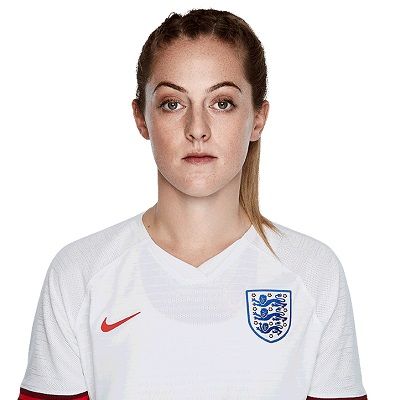 Who is Keira Walsh?

Keira Walsh is a professional English footballer. Keira plays as a midfielder for Manchester City of the WSL.

In the year 2019, England won the SheBelieves Cup which she was a part of.

Keira Fae Walsh was born on 8th April 1997 in Rochdale, England. She is the daughter of Mr. Walsh and Tracy Walsh.

When she was a child, her father inspired her to play football. As she stepped her teenage years, her passion for the game developed more.

In July 2014, she made her for Manchester City and was a substitute in a 1-0 win over Notts County. She became first-team regular and played an important role in City’s 2014 Continental Cup.

Similarly, in June 2015, she signed her first senior contract with the club. Her first goal was on 9th November 2016 against Brondby IF in the Champions League.

When she was 12 years old in November 2009, she received her first call-up to the under-15 squad.

She was named in the squad for the UEFA Women’s Under-17 Championship. She helped England to reach the knockout stage and a fourth-place finish in the competition.

Similarly, she was called up for senior England squad in November 2017 and in 2019 was selected as a part of England’s World Cup squad.

Similarly, she has signed an endorsement deal with Nike.

She has brown-eyed-blonde. She is 5 feet 6 inches tall and weighs around 67 kg.

You may also read the age, parents, career, net worth, body measurement and social media of Raúl Ruidíaz, Victor Osimhen, and Brill Garrett