Keiynan Lonsdale is an Australian actor, dancer, and singer-songwriter. He has been popular for his roles in movies like Divergent Series: Insurgent, The Finest Hours, and Love, Simon.

He revealed his sexuality on May 13, 2017, via his Instagram. He made the post by uploading a picture of himself, followed by a lengthy caption, and opened up that he is bisexual.

Keiynan also said that his role as Bram in the gay teenage romance love Love, Simon helped him to know about his sexuality.

Before it, he was dating an actress, Isabel Durant. They have also worked together in the Australian Television film Dance Academy in 2010. 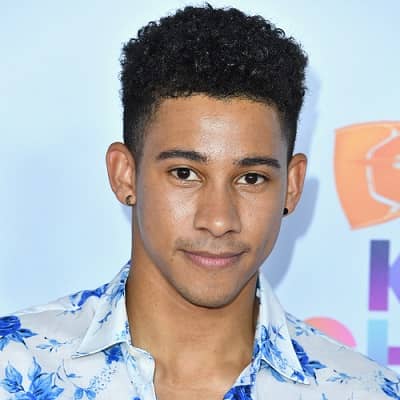 Who is Keiynan Lonsdale?

Keiynan Lonsdale is an Australian actor, dancer, and singer-songwriter. He has been popular for his roles in movies like Divergent Series: Insurgent, The Finest Hours, and Love, Simon.

Keiynan was born on 19 December 1991 in Sydney, Australia. He holds Australian–Nigerian nationality.

He has three brothers and two sisters from his mother’s side. Likely her as six siblings from his father’s side. Keiynan met his father when he was 10. However, Keiynan hasn’t revealed his parent’s names.

He has his education from Wood Bright High School.

The actor had his first job with a bit of dancing in the film Razzle Dazzle: A Journey into Dance in 2008. Likely he starred in an episode of All Saints. No sooner he landed a recurring of Oliver Lloydin Dance Academy in the 2012-second season.

He also appeared regularly in the third and final season. The actor also worked as a VJ on MTV for two and a half years. In 2014, he released a singles One and Only on iTunes. After that, he released musical recordings, including Higher in the year 2015. The same year he appeared as Uriah Pedrad in The Divergent Series: Insurgent.

The actor more into popularity after portraying in The Divergent Series: Allegiant in 2016. He released his musical recordings Good Life and Kiss The Boy, after a year respectively.

In 2018, he starred as Bram in the film Love, Simon. The actor shared that the role helped him come to terms with his own sexuality. Moreover, he also released his recording Preac in 2018 and singles Rainbow Dragon in 2019.

No sooner his career took a lift and he landed roles in various well-known movies. In 2019 he also appeared in Camila Cabello’s music video for Liar.

Just in 2020, he appeared as Julliard Pembroke in  Work It. The same year he starred in two Tv series Love, Victor, and Equal. He is now shooting as Duck in the upcoming movie  Weetzie Bat.

The actor has already earned $500,00 million value of total assets from his career. With the various upcoming projects, his net worth will be rising in the upcoming days.

His previous movies were also very good at commercials. Love, Simon earned $66.3 million against the budget of $10–17 million. Working for such movies he must have received a good salary.

Keiynan has never been part of any such rumors in the media.

However, he was in various news headlines and also was often speculated as gay. He has finally spoken about his sexuality and state that he is bi-sexual.

Keiynan stands with a height of 5 feet and 10 inches. Likely he weighs around 70 kg.

With his handsome looks, he has black hair and eyes.

You may also read the bio of Jack Kesy, Okieriete Onaodowan, Devlin Elliott, and Sophie Rundle.