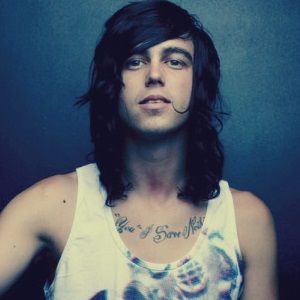 I always want to surprise myself, more than anybody else

Kellin is a married man. Kellin has lots of female fans who would love to date him. But unfortunately, it is not possible as he is committed to his marriage. He is married to his girlfriend-turned-wife, Katelynn Lahmann.

The marital ceremony happened in April 2013. As of now, they are living happily together sharing an incredible bond. Together, they have a daughter named Copeland.

After marrying Katelynn, he also became step-father of Katelynn’s two sons from her previous marriage, Liam, and Rowan.

Who is Kellin Quinn Bostwick?

Oregon-born Kellin Quinn Bostwick is an amazing singer. Multi-talented Kellin is also a lyricist, musician, and a keyboardist. In 2012, he won the “Singer of the Year” award at Alternative Press Leservoting. Furthermore, he has also featured with other bands like “Pierce The Veil”, “Machine Gun Kelly”, and so on.

Presently, he is a prominent figure among the media as the lead vocalist of the band, “Sleeping with Sirens”.

Kellin was born on April 24, 1986, in the city of Medford in the state of Oregon. He possesses American nationality and his ethnicity is North American.

He was born to parents, Mary(mother) and Jeuse Bostwick(father). Kelly had to go through a tough childhood as his parents got a divorce when he was only 3 years old. Furthermore, his dad abandoned him 3 days before his 4th birthday. He grew with a passion for music and wrote songs about his dad.

As per his education, there is no information on which school or college he went. He used to play in a band during in school’s events.

Kellin started writing songs and singing since he was a child. Initially, he wrote songs relating to his father who abandoned him. Afterward, in his school, he with his friend formed a band, “Closer to Closure”. He used to play in school’s several events.

Similarly, he was part of other different bands like “For All We Know”, “Our Name in Citylights”, and “Screenplay”. But things didn’t work out in those bands. Later, in 2009, a new band formed called, “Sleeping with Sirens”. The same year he joined the band as lead vocalist. He recorded with his band to debut their first album on March 23, 2010, named, “With Ears to See and Eyes to Hear”.

Additionally, he also wrote lyrics and composed some of the band’s songs. Furthermore, he released albums like, “Let’s Cheer to This”, “Feel”, and “Madness” with the band. He also collaborates with other bands and music artists time and again.

Presently, he earns a pretty good amount of salary and has collected some net worth. But those figures are not disclosed yet.

Kellin has been part of several rumors till now. One of them was he being dead in a car accident. Later, he posted on social media stating that he was alive. Back in 2012, he was part of the rumor that stated of him leaving the band, “Sleeping with the Sirens”. But of course, it was just a rumor as he is still in the band. He was also part of controversy where fans criticized him for charging $80 for taking a picture.

Kellin has a height of 6 feet 1 inch and weighs 75 kg. His hair color is dark brown and eye color is hazel. His shoe size is unknown.