Kelly Bensimon is an American author, socialite, editor, and former model. She is best known for appearing as a full-time cast member on the Bravo television series The Real Housewives of New York City from seasons 2 to season 4. She is married to Alejandro Lorenzo.

Kelly Bensimon was once a married woman.

She was previously married to fashion photographer Gilles Bensimon. They got married in 1997.

The couple had two daughters named Thadeus Ann Bensimon and Sea Louise Bensimon. After a decade of their marriage, the couple divorced in 2007.

After her divorce, she stayed single for almost seven years and began dating Alejandro Lorenzo in 2014. Since then, Kelly and Lorenzo are together. 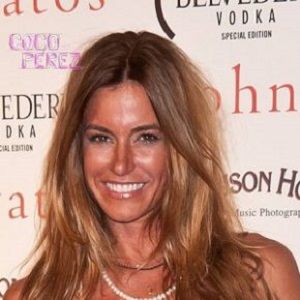 Who is Kelly Bensimon?

Kelly Bensimon is an American author, socialite, editor, and former model. She is best known for appearing as a full-time cast member on the Bravo television series The Real Housewives of New York City from seasons 2 to season 4.

As a model, she has previously appeared in magazines like Elle, Cosmopolitan, and Shape.

Kelly Bensimon was born on May 1, 1968, in Rockford, Illinois, USA. Her nationality is American and she is of North American ethnicity.

She was interested in modeling from an early age and she wanted to become a professional model since her childhood age.

She attended Trinity College, Connecticut, but dropped out after a year. Later, she graduated in 1998 from Columbia University’s School of General Studies with a degree in Literature and Writing. She is now completing an MBA with a focus on International Marketing at Northeastern University

Kelly began her career as a model in New York at the early age of 15. She has appeared in magazines such as Elle, Cosmopolitan, and Harper’s Bazaar.

She has also modeled for Playboy. She appeared on the cover of Playboy magazine in March 2010.

Bensimon first appeared in three seasons of The Real Housewives of New York City. She currently works as an editor at large for Hamptons Magazine and Gotham Magazine.

She is also the founding editor of Elle Accessories Magazine. Bensimon is also a style columnist for the newspaper AM New York.

She has written three books for Assouline Publishing; In the Spirit of the Hamptons, American Style, and The Bikini Book. Kelly has her own four jewelry collections.

Kelly Bensimon: Salary and Net Worth

She has a net worth of $25 million but her salary and net worth are unknown.

It was rumored that she suffered a nervous breakdown in 2011 after a particularly violent vacation filming with the other housewives.

Currently, there is no rumor of her other love affair.

Kelly has a height of 5 feet 10 inches. Her body weighs 57kg. She has light brown hair and hazel eyes.

Furthermore, there are no details about her body measurement. Besides these, her shoe size is 11(US).

Kelly Bensimon Feels Sexiest at 49! She reveals her Secret of having perfect body out in open!! Find out.