Kelly Brook is currently a host at the Drivetime Show Weekdays and Saturday Breakfast. She is one of the sexiest women in the wold and is considered a sex icon. Kelly is dating Jeremy.

Her marital status is married. Recently in 2022, she got married to her long-time boyfriend Jeremy Parisi. Moreover, there is no more info about her marriage.

In 2013, she had an alleged affair with Jeremy Piven. The same year she was linked with Gethin Jones.

Later Thom Evans and Kelly had their relationship and shared a very romantic relationship. Thomas is a former Scottish international rugby union player and model. Without marriage, she was expecting a baby but unfortunately lost it due to miscarriage.

In 2010, she was in an alleged relationship with Matthew Morrison. From 2008-to 2013, Kelly had an affair with Danny Cipriani. 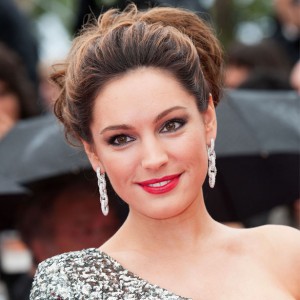 People think you can't be clever if you have breasts.

I've loved acting and dancing since I was a kid. Before anyone thought I was pretty or before I had a voluptuous figure, that was what I was going to do.

Who is Kelly Brook?

Kelly Brook is an English model, actress, and television presenter. She is popular for her role in The Italian Job in 2003 and Piranha 3D in 2010.

She also co-presented The Big Breakfast for 6 months. She also endorsed many brands. Kelly also appeared in the music video of Lawson’s song Juliet in 2013.

Kelly was born on November 23, 1979, as Kelly Ann Parsons in Rochester, Kent, England, the U.K. She is of English-Irish ancestry.

By profession Kelly’s mother, Sandra was a cook and her father Kenneth Parsons was a scaffolder. Kelly looks exactly like her mum.

Kelly also has a younger brother Damian and an older half-sister, Sasha. Later at the age of 57, her father died due to cancer.

Kelly passed her school from Thomas Aveling School in Warren Wood, Rochester. After that, she completed her studies at Italia Conti Academy of Theatre Arts after a three-year course.

Kelly Brook started her career as a model at the age of 16 after she won a beauty contest. She was featured in various advertising campaigns like Reebok, Lynx Apollo, Kit Kat chocolate bars, Ultimo, Pepsi UK, and much more.

She was also the cover page model of many magazines. At the age of 17, she stepped on television by debuting in Fist of Fun. She was also featured in The Big Breakfast.

Kelly did the movies like Sorted, Ripper, Absolon, and also The Italian Job as Lyle’s Girlfriend. She was appreciated for her work in the movie

Kelly participated in the celebrity dancing competition Strictly Come Dancing on BBC in 2007. She also did many television roles like Hotel Babylon, Renaissance and Britain’s Got Talent in 2009, where she was a judging panel, Celebrity Juice, One Bigs Happy, Celebrity Juice, and much more.

Her movie career was also taking heights as she played in Survival Island as Jennifer, and Fishtales as Nereid in 2007. She had an appreciating role as Danni Arslow in Piranha 3D in 2010.

Kelly has launched her own line of swimwear along with New Look. As of 2022, her career took her to heights and she made a total net worth of $10 Million.

Kelly Brook was linked with Matthew Morrison after their meeting at Oscar Party but later it was confirmed that it’s a rumor likewise she was again rumored to be dating Jay Brown and Jeremy Piven.

Kelly was also in controversy for hitting her boyfriend Jason Statham and Danny Cipriani while dating them.

She was also been in controversy when she was on her trip to Paris when she had her dinner of Red Wine and Foie Gras and shared the details. Her fans found it bad and commented negatively.

Kelly Brook has a Curvaceous figure with a body measurement of 39-28-37 inches and wears a bra size of 34E. Her dress size is 10 US and her shoe size is 9 US.

She has a height of 5 feet 6 inches and 66 kg. Her eye color is light brown and her hair color is brown.

A glance at the Secret Italian Wedding of Kelly Brook and Jeremy Parisi!