Kelly Dodd is castmember of #RHOC. Kelly is married and a proud mother of Jolie. 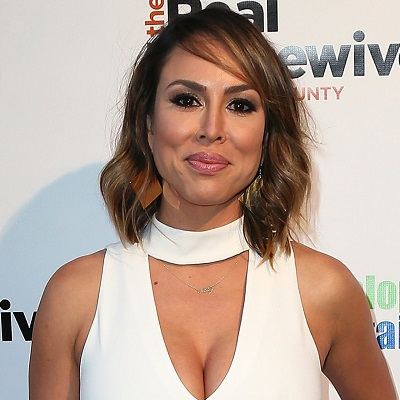 Kelly Dodd is married to the reporter, Rick Leventhal on 10th of October 2020. They announced their news of engagement through Instagram.

Their wedding was held in Santa Rosa, California.

Previously, she was married to Michael J. Dodd. The wedding took place on the 15th of April 2006. Together, they have a daughter Jolie Dodd (b. 2006).

After the 12 years of marriage, they got divorced from each other on the 23rd of February 2018. She filed for divorce on the 9th of October 2017.

Before that, she married Scott Christopher Silva. The married on the 15th of March 2001. Later, they separated via divorce on the 14th of October 2004.

Who is Kelly Dodd?

American Kelly Dodd is an entrepreneur and TV Personality. She is renowned for as the cast member of The Real Housewives of Orange County.

She is also a co-owner of the Positive Beverage.

Kelly Dodd was born on the 26th of September 1975 in Scottsdale, AZ to Frank Meza and Bobbi Meza. She is of British-Scottish ethnicity. As of 2020, she is 44 years old. Also, her zodiac sign is Libra.

She happens to be the eldest child of her parents. She has a younger brother, Eric. Details on her academics are behind the curtains.

In 2016, Kelly Dodd got added to the TV series, The Real Housewives of Orange County as the main cast. Along with the series, she came in the limelight within no time. The very first episode of the season has around 1.72 US viewers. Till date, she has been part of 86 episodes of the Bravo’s series, RHOC.

Next, she will be appearing on the next season of the series. Apart from the reality series, she also happens to be a COO of the beauty company, Kiss Me Mirror. The company offers cosmetics make up products.

Also, she is a business entrepreneur. She owns a certain portion of the business venture, Positive Beverage. The company offers healthy electrolyte beverages on various favors including Tropical Berry, Peaches, and Cucumber. Also, she promotes the band via her Instagram post.

Besides that, she also makes through her business ventures too.

Kelly Dodd has brown eyes with brunette hair. She stands at a height of 5 feet and 8 inches and weighs around 64 kg.

During an Instagram live video, she made some controversial remarks regarding the COVID-19 pandemic. At the video chat, a friend of hers specifically talked about the number of deaths in New York.

At the time, she told that people are going to die apathetically. Due to the remark, a controversy was sparked and she got backlashed.

Later, she apologized for the comments publicly. Also, she mentioned that she is not being insensitive.

You may also read the bio of Nicole TV(Kayla Nicole Jones), Mike Sorrentino, and Shane Watson.