Kelly Klein is currently single and is not dating anyone. There is not much information regarding her present love relationship and affairs.

Previously, Kelly was married to BJ Whitmer. The couple had tied the knot in the year 2017.

Later, Former Ring of Honor performers BJ Whitmer and Kelly Klein revealed that they are divorcing. Whitmer shared his thoughts on the matter on Twitter. 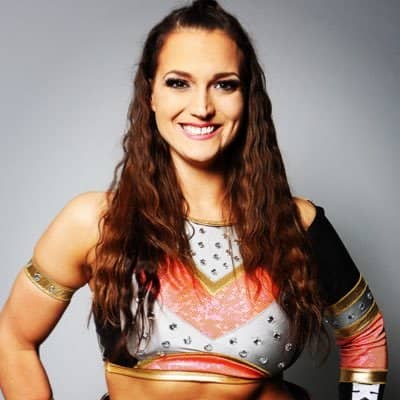 Who is Kelly Klein?

Kelly Klein is a free agent professional wrestler from the United States. She is best recognized for her stint in Ring of Honor, where she won the Women of Honor World Championship three times in a row.

She has not revealed anything regarding her family background. Thus, we don’t know who her parents are. Also, there is no information about her siblings.

She is very secretive regarding her educational background. Thus, we don’t know which college or school she has attended while getting an education. Also, it is not known at which age she graduated.

Klein made her Ring of Honor debut on October 24, 2015, in Dayton, Ohio, at Night 2 of the Glory By Honor XIV event, defeating Ray Lyn via submission in under a minute.

Kelly made her televised debut on Ring of Honor Wrestling from Nashville, Tennessee on JuneRin 26, 2016. She defeated Taeler Hendrix via submission in the main event of the debut episode of Women of Honor. She defeated ODB in a winning effort on the December 14, 2016 episode of Ring of Honor Wrestling, the second WOH special, after ODB passed out due to Klein’s submission.

Kelly had an undefeated streak as a villain in ROH until it was broken by Karen Q with the help of Deonna Purrazzo at an event in May 2017. This resulted in a triple threat match at the 3rd Women of Honor event in July, which Karen Q also won.

On the July 29 tapings, Klein defeated Purrazzo in another singles bout, with the victory coming when Karen Q turned heel and attacked Purrazzo. Klein was let go by Ring of Honor on November 22, 2019, while still recovering from post-concussion syndrome and holding the title of Women of Honor World Champion.

Klein made her World Wonder Ring Stardom debut on October 14, 2017, as she competed in the Goddesses of Stardom Tag League event. Together with Bea Priestley, she won the tournament. Klein and Bea challenged Oedo Tai (Hana Kimura and Kagetsu) for the Goddess of Stardom Championship after the competition but were unsuccessful.

Kelly has not disclosed anything regarding her exact income, salary, and earnings. However, as per sources, Kelly Klein has an estimated net worth of $1million-$5million as of 2022.

Kelly, a former ROH star, has filed the corporation and its parent company Sinclair Broadcasting for employment discrimination.

According to the lawsuit, Klein was fired from ROH on December 31, 2019, because of “her complaints about the unequal pay for WHO female wrestlers, the lack of safety and medical regulations after Plaintiff sustained a concussion in October of 2019, and the sexual harassment at ROH.”

Kelly Klein has a height of 5 feet and 5inches and weighs around 75kgs. She has a fit and muscular body with beautiful light brown hair and Black eyes.

Whereas, she is not seen much active on other social media accounts.

Megan Fox and her Partner’s Blood Drinking Ritual Takes the Internet by Storm!

Who is Bobby Alt? Know about his failed marriage with Caroline D’Amore

Know Kate Miner – as a musician, actress, model, and wife!