Kelly Osbourne is of a famous British singer-songwriters. She is currently in a relationship.

Kelly Osbourne dated an English male fashion model, Luke Worrall in June 2008. They dated for nearly a year and engaged in March 2009. But, the duo could not make it further, as the reports were that Luke cheated on Kelly. They finally separated in July 2010.

Osbourne dated Rob Damiani in early 2011. Kelly showed her intentions of keeping this relationship private after getting split from fiance Luke. They also separated in April 2011.

A photographer, Anton Lombardi who was friends with Kelly from years had dated her in the past 2011 for a couple of months.

Matthew Kenney, an American chef met Kelly at Kate Moss‘s & Jamie Hince’s wedding in 2011 and soon they started dating. They decided to take their relationship to the next level and hence engaged in July 2013. However, due to some unknown reasons, they ended their engagement in January 2014.

In the summer of 2014, actor-singer, Quincy Brown and Kelly dated for a very short time.

In July 2014, she confirmed her relationship with the bearded model, Ricki Hall as she shared a tongue kissing a picture of herself with Ricki. 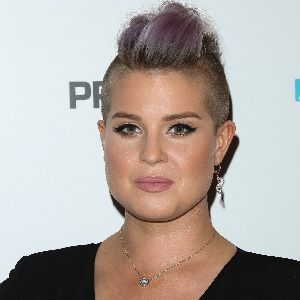 I feel good in my own skin because I've accepted the fact that I'm me. That's what's so great about being alive and being on this planet: Everybody's different.

Women are so unforgiving of themselves. We don't recognize our own beauty because we're too busy comparing ourselves to other people.

I never thought in a million years I'd be that healthy girl who wakes up every morning to exercise. After being called 'cherubic and chubby,' I'm rocking a bikini!

Who is Kelly Osbourne?

Kelly Osbourne is one of the famous British singer-songwriters. Moreover, she has also built her career as an actress, television presenter, and fashion designer.

She is best known for her appearances in The Osbournes with her family and also in the E!’s Fashion Police, where she had served as a panelist and presenter.

Kelly Osbourne was born on 27 October 1984 in Westminster, London. Her birth name is Kelly Michelle Lee. She is the daughter of The Prince of Darkness, Ozzy Osbourne, and Sharon Osbourne.

Her father Ozzy is a rock singer and her mother Sharon is a media personality.

Her childhood had been nomadic. She has traveled a lot with her father for various music shows over the world. She says that she feels great to learn by traveling; what she had to study in the books, she got to see in real by visiting at places with her dad Ozzy’s band “Black Sabbath”.

She had also seen some of the museums and historic places around the world. And she hasn’t continued her studies.

Kelly Osbourne began her career in his family reality show on MTV. The name of the reality show was The Osbourne. This series started in 2002 and the final episode of this series is in 2005. This reality show was very popular at that time. In that show, she appeared in a total of 52 episodes playing the role of herself.

Working out with the label Epic Records, she released her debut album Shut Up on November 26, 2002. It was soon dropped from Epic Records as it was a failure. She made certain changes and re-released the album again on September 30, 2003. The new album consisted of 5 changed tracks.

It charted at number 1 in the Billboard’s Top Heatseekers. 2001 documentary by Penelope Spheeris We Sold Our Souls for Rock ‘n Roll as herself. Though it was filmed at the 1999 Ozzfest, due to legal issues it’s release was delayed until 2001. The 90 minutes long documentary received mixed reviews and also won an award in the category of “Most Popular Documentary” at the 2001 Melbourne International Film Festival.

Furthermore, she has also done various fashion projects. From the year 206 to 2009, she has done various Acting and hosting duties. In 2012, she appeared as a guest judge in season 4 of RuPaul’s Drag Race and hosted the New Now Next Awards. She is a regular judge on Project Runway: Junior.

In June 2011, she hosted the Miss USA pageant at the Planet Hollywood Resort and Casino, Las Vegas, with Susie Castillo. In 2018, Osbourne joined her father and brother in their televised global tour that is documented in the series Ozzy & Jack’s World Detour.

She has been nominated for several prestigious awards and she has also won several of them. In 2003 she is nominated in three categories in teen choice awards. Accordingly, she won two of the awards for the reality show The Osbourne.

Her net worth is now $20 million as of 2022. And her salary is unknown. But as she has worked in various of the popular project and shows, she must have good earning.

On 4 August 2015, while appearing as a guest co-host on The View, Kelly caused controversy when she said, “If you kick every Latino out of this country, then who is going to be cleaning your toilet, Donald Trump?”

Her comments were in response to then-GOP Presidential candidate Donald Trump’s stance on illegal Mexican immigration.

Kelly Osbourne stands with a height of 5 ft 2 in(157 cm). Likely, she weighs 57 kg or 126 lbs. She has naturally Blonde colored hair but dyes different colors.

Kelly is active on different social media platforms. She uses Instagram and has more than 2.1M followers on it. And she has over 3.7M followers in her Twitter account.

Her Facebook page also holds more than 1M followers. Furthermore, she has her own channel on Youtube.

To know more about Lisa Darr, Sami Gayle, and Amy Acker, please click on the link.