Kelly Oubre Jr. is an American professional basketball player who plays for Phoenix Suns. Kelly is not dating anyone currently. 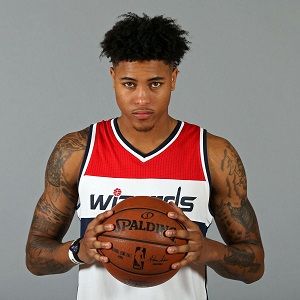 Previously, he was dating Shylyn since December 2020. The reason for their break up is because he cheated on Shylyn with two other girls named Celina Powell and her friend Aliza. Celina and Aliza are IG models.

In 2019, he was in a relationship with Jasmine Sanders. Jasmine is a German-American model and fashion influencer. They had a short fling and later split due to their career commitments.

Who is Kelly Oubre Jr.?

Kelly Oubre Jr. is an American professional basketball player. Currently, he plays for the Washington Wizards of the National Basketball Association.

Previously, he has played for the Atlanta Hawks. Prior to Atlanta Hawks, he used to play his college basketball at the University of Kansas.

Later, he moved to Richmond, Texas after Hurricane Katrina in 2005 along with his parents. As a child, he had a keen interest in basketball and began to play at his school.

His ethnic background is All-American.

Later, he moved to Findlay Prep in Henderson, Nevada for his senior season. In addition, Kelly played his college-level basketball at the University of Kansas.

Kelly Oubre Jr. began his professional basketball career with the Atlanta Hawks on June 25, 2015. However, he joined the Washington Wizards for the 2016 NBA Summer League. Moreover, he made his first career double-double with 10 points and 10 rebounds in a 101–95 overtime victory against the Sacramento Kings.

Later on December 10, 2016, he scored a career-high 19 points to go with nine rebounds and three steals in Washington’s 110–105 win against the Milwaukee Bucks. Additionally, Kelly again hit his career-high with 19 points in a 120–117 loss to the Golden State Warriors.

As a professional basketball player, the 21-year-old star earns a healthy amount of money from his profession. Currently, he receives a salary of $1.92 million. His net worth is between $1 Million – $5 Million according to the sources.

So far, he has not won any awards and achievements. Being a talented player, he will definitely grab some awards in the near future.

Once, Kelly was dragged into a controversy for a controversial coat he wore in the game against Cleveland Cavaliers. In the back of his black jacket, he was wearing with “f–k you” stitched into the back.

Prior to this, the young star also got fined for kicking a ball into the stands during a playoff game against the Atlanta Hawks. For his behavior, he had to give $25,000 as a fine.

Kelly has a towering height of 6 ft 7 inches and weighs 91kg. Furthermore, he has hazel brown eyes and black hair.

He has inked tattoos over his body. besides, he has pierced his ears and nose.