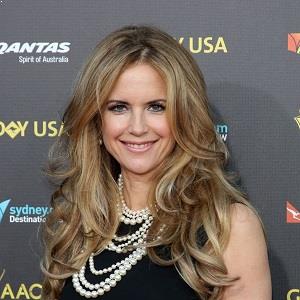 I think by being happy it actually affects the way that you look too.

I took a long time off to have my baby and spend time with my family.

I would like to end world hunger and create world peace, stop corruption, stop drugs getting to kids.

We are all trying to balance our careers and children and give as much of ourselves and our time to them. You work and have a husband, and projects, and friends. It is a balancing act.

Kelly Kamalelehua Smith, who is known as Kelly Preston, first got married to an actor Kavin Gage in 1985. Their relationship lasted for only two years. They divorced each other. There is no any information regarding their issue of divorce.

Preston also had an affair with her boyfriend George Clooney and briefly engaged with Charlie Sheen in 1990 but she again got married to her second husband John Travolta in 1991. John is also a famous actor in Hollywood.

They first met while making the film The Experts. They had two sons Jett Travolta and Benjamin Travolta and a daughter Ella Bleu Travolta.

On January 2, 2009, their eldest son Jett Travolta died because of Kawasaki disease while the family was on holiday vacation in the Bahamas. After one year of his death, Kelly gave birth to Benjamin. Their daughter was born in 2000.

Who is Kelly Preston?

Kelly Preston was a famous American actress and former model. She was best known for her appearance in more than sixty television and film productions. She was also known as the wife of talented actor John Travolta.

Talking about her early life, She was born on October 13, 1962. Kelly was American by nationality and she belongs to mixed ethnicity.

Her birth name was Kelly Kamalelehua Smith. Her middle name “Kamalelehua” means ‘garden of lehuas’ in Hawaiian. She experienced her childhood in Hawaii, USA.

Her father who worked for an agricultural firm drowned when she was only three years old. Later, her mother Linda Carlson who was an administrator of a mental health center married Peter Palais.

He is a personnel director and he subsequently adopted Kelly. Kelly has a younger half-brother named Chris Palais. She moved to Iraq when she was five years old and also lived in Australia in her teenage life for several years.

Kelly graduated from Punahou High School in Hawaii. Then she attended the University of Southern California where she studied drama and theater.

Kelly Preston began her career acting in 1985 with her first film Teen Flick Mischief as Marilyn McCauley. In the same year, she appeared in the film Secret Admire which was a critically acclaimed movie of 1985.

Preston made her first TV appearance on the episode of the series Hawaii Five-O in 1980. She has played different roles in many movies including Space Camp (1986), Twins (1988), Jerry Maguire (1996) as Avery Bishop along with Tom Cruise, For Love of the Game as Jane Aubrey with Kevin Costner, and in Holy Man (1998) as Kate Newell with Eddie Murphy and Jeff Goldblum.

Her role Tell in the 2000 film Battlefield Earth as a girlfriend of her husband received Worst Supporting Actress at the 21st Golden Raspberry Award function.

Preston also featured in She Will Be Loved, the music video of Maroon 5 in 2004. Later, she appeared with her husband in the film Old Dogs which was released on November 25, 2009.

She has a net worth of  $180 million but her salary is not revealed.

There are some rumors regarding her relationship with her husband John Travolta. They can’t catch a break these days.

The recent news is rife with a buzz that Kelly and John are “faking it for the cameras”, amid divorce rumors. However, she has not been involved in any controversy in her entire life.

Her hair color was dark brown and her eyes are blue.