Kelly Stables is an American actress. She is married to Kurt Patino and is blessed with two kids.

Kelly Stables is currently in a marital relationship. She exchanged vows with Kurt Patino on 26 March 2005. Her husband is a screenwriter.

This couple is blessed with two children. Her first son named Kendrick Kurt Patino was born in Sep 2012. Then in April 2015, she gave birth to her second kid named Kellen William Patino. 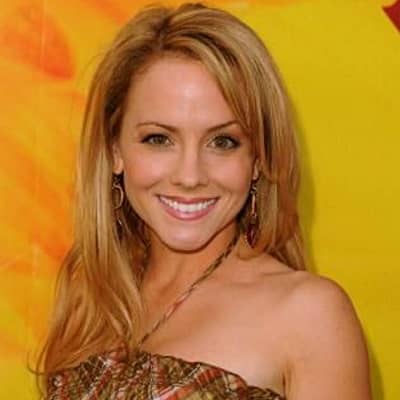 I love saying dialogue and creating a full character more than just being physical. But I always end up doing physical stuff in my roles

I'm at the stage in my pregnancy where I don't feel pregnant. You feel very, 'Oh yeah, I'm pregnant,' because you're over the morning sickness and it's not too uncomfortable. It's fun

Wearing a monkey suit really lets you know where you stand as an actor.

Who is Kelly Stables?

Kelly Stables is an American actress. She is mostly known for her appearances in shows such as Two and a Half Men, The Exes, and Superstore.

She has done TV, movies as well as theatre.

She was born as Kelly Michelle Stables on 26 Jan 1978 in St. Louis, Missouri, US. The name of her father is not disclosed and her mother’s name is Jill.

Kelly’s ancestry is Caucasian and has a sister named Tanya Childress.

Talking about academics, she attended the University of Missouri and achieved her bachelor’s degree (Communication).

Kelly Stables as a stage artist was seen playing the title role in Sleeping Beauty and Wendy in Peter Pan. Her other acts are W.R. and the Daisy, and more.

She also gave her voice in animated movies such as Zambezia, Cloudy with a Chance of Meatballs 2, Tom and Jerry: The Lost Dragon, Dolittle, etc.

Kelly as a TV actress was seen as Melissa in Two and a Half Men, Eden Konkler in The Exes, Mary in No Tomorrow, and Janette in Greek.

She at present is involved with a sitcom titled Superstore. In this, she plays the character of Kelly. Her other notable TV shows are,

Her net worth at present is $3 million as of 2022. However, her salary and other earnings are unknown.

This star actor is keeping herself away from rumors and also not surrounded by any desperate scandals.

Regarding Kelly Stables’s body features, her height is 4 ft 10 inches and her body weight is 54 kg. Moreover, her eyes are hazel and she has brown hair.

Michael Bunin
Tags : Actress Superstore Two and a Half Men