Kellyanne Conway is enjoying her happy and healthy marital relationship with her beau George T. Conway since 28 April 2001. They are proud parents of four children. These include a set of twins George, Claudia, Charlotte Conway, and Vanessa Conway.

They are sharing a very happy marital relationship with each other. 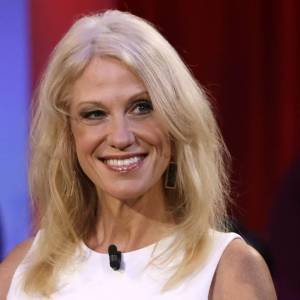 He either will disclose or not disclose the full contents of that conversation, but he's well aware of what U.S. policy has been.

I bet, there was very little coverage -- I bet it's brand new information to the people that President Obama [Barack Obama] had a six month ban on the Iraqi refugee program after two Iraqis came here to this country, were radicalized, and they were the masterminds behind the Bowling Green massacre. I mean, most people didn't know that because it didn't get covered .

Who is Kellyanne Conway?

She has also been a Republican Party campaign manager, strategist, and pollster. Kellyanne has also served as president and CEO of The Polling Company Inc./Woman Trend.

She is the daughter of John Fitzpatrick, father, and Diane Fitzpatrick, mother. Her parents divorced when she was just three years old.

After the divorce, she was raised by her grandmother and two unmarried aunties.

She comes from a Catholic family.

She did her graduation from St. Joseph High School in the year 1985.

She is also the winner of the New Jersey Blueberry Princess Pageant at the early age of 16.

At the age of 20, she became the winner of the ‘World Champion Blueberry Packing Competition’.

She did a Bachelor of Arts Degree in Political Science from Trinity College, Washington, D.C.

Kellyanne Conway stepped in the polling with Wirthlin Group, a Republican polling firm. Before being a founder of her own firm, she also worked with Luntz Researching Company. Her company researches and provides consultation on customer trends and often trend regarding women.

Presently, she has been working as a counselor of President Donald Trump. Conway’s career was not an easy path for her. She has faced a lot of ups and down within her career.

Conway, a veteran political operative, has spent the last three decades advising Republicans on how to appeal to female voters.

Also, she was already doing this for the Trump campaign before she became his campaign manager. On Dec. 22, 2016, Conway was named counselor to the president.

Regarding the political figure, she had already worked with Congressman Jack Kemp, Senator Fred Thompson, Former Vice-president Dan Quayle, and much more.

She has a net worth is $40 million according to the sources. Her assets and properties are worth $25 million. Moreover, Kellyanne resides in an $8 million residence in the DC area with her family.

As an official White House personnel report her income is $183,000.

Kellyanne Conway was in the center of the limelight when her name was included in a controversy regarding her relationship with President Donald Trump.

As per the recent news, they have a “business relationship” with former employer and employee.

Kellyanne and her lawyer and fierce critic of the U.S. president husband George T. Conway III have extreme opposite opinions about President Trump and due to which their relationship is at a stake.