Kelsey Barnard Clark is a chef who has won Top Chef 2019. 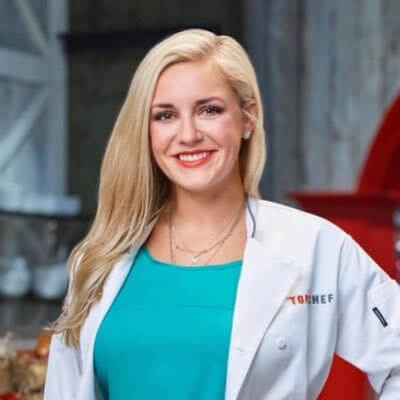 Kelsey Barnard Clark is a married woman. Her husband‘s name is Deavours Clark. The couple met several years back and both of them share a passion for cooking. After daring for several years, the couple decided to exchange wedding vows on April 18, 2015. The ceremony took place in St. Augustine Lawn, Rosemary Beach in Florida.

They were blessed with a baby boy on 30 June 2017 and named him Monroe. The family of three currently reside in Alabama. In addition to being life partners, the pair are also business partners and have opened the restaurant, KBC together.

Who is Kelsey Barnard Clark?

Kelsey Barnard Clark is an American professional chef. She became famous in 2019 after winning the title of Top Chef 2019. Moreover, she is the founder of her restaurant, KBC and her own catering company.

When she was in middle school, she already had a baking obsession. At the age of 15, she catered at her first wedding. Her most memorable memories were at the beach catching and eating fresh fishes with her family.

Talking about her education, Clark was enrolled in Auburn University. However, at the age of 20, she dropped out of college to train at the Culinary Institute of America located in New York where she enhanced her cooking skills.

Clark was always interested in cooking. She began baking for her friends at the age of 12 and at the age of 15, she catered at her first wedding. She moved to New York to learn cooking at the age of 20 and returned three years later to open Kelsey Barnard Catering on Westgate Parkway. Her business boomed and she opened KBC Butcher Block featuring a market selling jams, jellies, and pickles.

Her second location, KBC, consists of an eatery, bakery, and catering service. All the food prepared by her is fresh and home-made.

In 2017, she made it to the final rounds of the tryouts but found out she was pregnant so she had to withdraw. However, in season 16, she was invited back on the show. On March 14, 2019, the final episode aired and Chef Kelsey Barnard Clark emerged as the winner of the latest edition of Top Chef.

Kelsey Barnard Clark has an estimated net worth in the region of $100k-$1 million. She received a grand prize of $125,000 as the winner of Top Chef. Moreover, she also won a $50,000 prize package and pocketed an extra $10,000 for being voted fan favorite. An average restaurant owner in America earns around $60k annually.

There are no rumors about Kelsey. Similarly, she has not been involved in controversies. She has not done anything controversial to harm her image and reputation as a chef. Her restaurant is well-rated and her performance in Top Chef was also appreciated by a lot of people.

You may also like to read the Bio, Social Media, Body Measurements, Career, and more of Chris Santos, Sandra Lee, Noah Galuten, and more.