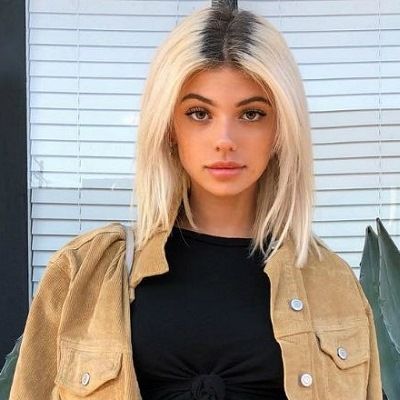 Kelsey Calemine’s is in a relationship with Ryland Lynch. Ryland is an Instagram star.

Kelsey confirmed their affair by posting a picture of them together on her Instagram on March 24, 2017.

Kelsey has dated Asher Brown in the past.

She is also seen kissing her girlfriends in her Instagram pictures.

Who is Kelsey Calemine?

Kelsey Calemine is an Instagram star, who posts sexy and sultry pictures on her handle. Kelsey is also Social media personality.

She is also famous by her nickname, Fatherkels.

Kelsey Calemine was born on January 14, in the year 1999, in Los Angeles, California. She is a Capricorn.

She has a step brother who is younger than her.

Kelsey Calemine posted her pictures on Instagram. She came to the limelight after she was compared with Pretty Little Liars star, Lucy Hale‘s eyes and Kylie Jenner’s pout.

Calemine drew the attention of many followers and popularity through Instagram.

Kelsey was pleased by those comparisons, but her life changed even more when Lucy Hale herself posted Kelsey’s picture on her Instagram profile.

Kelsey had over 300,000 subscribers, but the numbers jumped immediately after Lucy’s posted her picture.

Kelsey has made her career with the help of various social media platforms, so she keeps posting on a daily basis to support the interest in her persona.

Lucy joked that if she and Kylie Jenner would have a child, it would look like Kelsey. Some people couldn’t even believe Kelsey was a real person, considering her photos to be a result of someone’s professional work in Photoshop; regardless, Kelsey’s followers soon reached the one million milestone.

She uploads photos of herself wearing new fashion styles regularly.

Apart from the Internet, she had done modeling with her girlfriend in numerous magazines.

She has an estimated net worth of around $0.2m US. She earns over 20k USD per Instagram post.

She is a dog lover, and has a small dog named Mochi. As for her favorite food, she loves sushi, and vegetables.

Kelsey has always been a fan of the music band called “Spice Girls”, and Emma Bunton aka “Baby Spice” was always her favorite member of the band.

She is a dark brown hair and hazel eyes with 33-24-33 inches body stats and wears a bra size of 30C. Her obsession with dyeing hair color is something she has in common with her celebrity lookalike Kylie Jenner.