Kelsey Kreppel is an American renowned social media personality and former preschool teacher. She recently got engaged with his boyfriend Cody Ko.Cody Ko is also a popular YouTuber

Kelsey Kreppel is already taken. She recently got engaged with his boyfriend Cody Ko.

Cody Ko is also a popular YouTuber. The beautiful couple officially announced their affair in 2017, featuring on one of his boyfriend’s podcast videos Insanely Chill.

On 19 December 2021, the duo announced their engagement via Instagram with pictures where Ko got down on his knee in a beautiful beach setting. 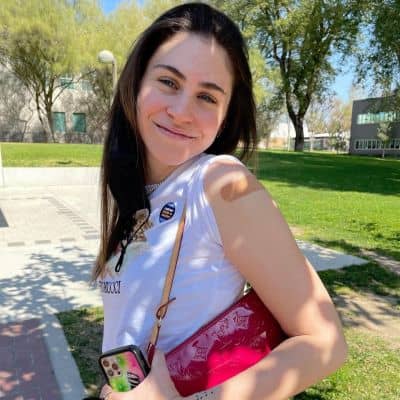 Who is Kelsey Kreppel?

Kelsey Kreppel is an American renowned social media personality and former preschool teacher. She is popular for her YouTube channel where she uploads content including vlogs, fashion lifestyle, and cooking videos.

Kreppel is also best known as the fiance of a fellow internet sensation, Cody Ko.

Kelsey was born on September 24, 1993, in Los Angeles, California. Her full name is Kelsey Lang Kreppel.

Kreppel is the youngest child of Neil Louis Kreppel (father) and Laureen Lang Krepper (mother). She has an older brother named Kevin Keppel. Talking about his academic background, she studied child and adolescent development in college.

Further, he holds an American nationality. Her mother is Catholic whereas his mother is Jewish.

Kelsey earlier worked as a preschool teacher. On December 10, 2014, she joined YouTube and uploaded the first video titled “Thanks for having me” on December 9, 2017. The video has garnered over 584k views to date. As of now, she has uploaded nearly 123 videos on her channel.

Similarly, she has amassed more than 922k subscribers on the channel. Her most viewed video, Met Gala 2019 Fashion Review has garnered over 2.9m views as of now. Aside from YouTube, Kreppel is popular on Instagram where she uploads her amazing pictures, daily lifestyle, and even endorses several brands through her Instagram page.

Kelsey is a rising star. She stays miles away from any sorts of rumors and controversial matters that create headlines in the media.

Kelsey earns an impressive amount of wealth from her career as a YouTuber and a social media personality. As of 2021, she has an estimated net worth of around $1.2 million.

According to the social blade, she earns in the range of $4.6 thousand to $73.4 thousand from her YouTube channel.

The internet sensation has a well-maintained body physique. She has a fair complexion. Kreppel stands at the height of 5 feet 6 inches tall and her weight is about 53 kg.

Likewise, she has hazel pair of eyes and dark brown hair color. She also has a couple of tattoos on her body.

Besides YouTube, Kreppel is active on Instagram where she has more than 795k followers and 124.7k followers on Twitter. She is also active on Tiktok with over 422.4k followers.