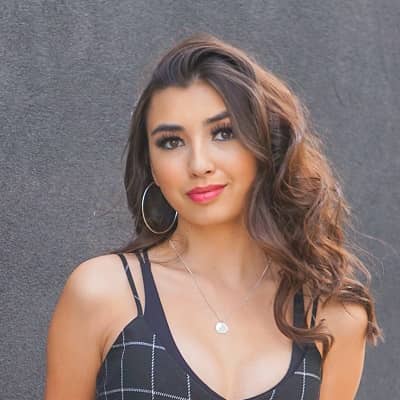 Presently, the notable actress as well as dancer, Kelsey Lynn Cook is currently single and she is not dating anyone.

Moreover, she has just started her career and is focused on her acting profession.

Who is Kelsey Lynn Cook?

Kelsey Lynn Cook was born on 26 April 2003. As of now, her age is 17 years old. Likewise, her birthplace is San Diego, California, the USA. Cook’s real name is Kelsey Cook.

Not much known about her father and mother, Kelsey’s is very tight-lipped. She has never stated her parents’ as well as siblings’ details in the public and media.

Talking about her nationality, Kelsey holds an American nationality whereas her ethnicity is Caucasian.

Regarding education, the star has kept her educational details low-profile.

The multifaceted talent, Lynn has performed as an actress, dancer, and model as well. From an early age, she has started working in the acting and entertainment industry. As a dancer, Cook debuted in a short video, Nicky Jam: El Amante in 2017.

Additionally, she debuted in the Television series Nicky, Ricky, Dicky, & Dawn in the role of Mindy in the year 2017. Moreover, Cook has portrayed in the series, Just Add Magic in 2018 in the character of Jessica.

The star has also emerged in the short music video titled, Chicken Girls: Dancing on the Ceiling portraying the character of Kimmie. Similarly, Kelsey has played in the Chicken Girls: The Movie in the same character in the year 2018. She gained high popularity after performing in the series.

The famous star was part of 18 episodes of the series, Chicken Girls portraying the role of Kimmie.

Besides, Cook is well-recognized for her act in Holiday Spectacular (2018), and other short movies as well.

It is reported that Kelsey Lynn has an estimated net worth of $ 500 thousand.

Nonetheless, she has kept her exact salary, earnings, and assets details behind the curtain.

17 years old, Kelsey Lynn Cook has never been part of any controversial matter or rumors till now.

It seems that she wants to enjoy her personal life and does not prefers to merge professional life with it.

The famed actress, Kelsey Lynn Cook has not just a beautiful career but also charming looks and an admirable personality. Cooks stands at a height of 5 feet 4 inches.

Moreover, she has a balanced bodyweight of 52 kg. Additionally, she has brown hair as well as brown eyes.

However, Lynn has not disclosed her exact physical measurement in the public yet.

About her social media presence, Kelsey is an active personality on social media. Cook has more than 161k followers on her official Instagram account @kelseylynncook. She is active on Twitter as well with just 221 followers.