Kelsey Owens is an American model and television personality. She has been modeling for Mother Management and represented by Next in Paris, Milan, and London. 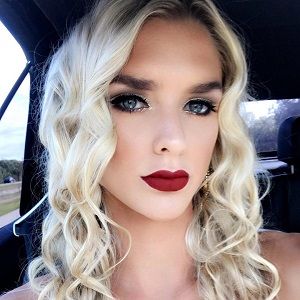 Kelsey Owens is an unmarried woman. Furthermore, she is in a relationship with Max Strong. Previously, she has dated fellow star, Garrett Miller.

The couple was in a relationship in 2017 and run their relationship for several months and broke up shortly. As she broke up with Garrett, there is not any rumor regarding her relationship with any man.

However, in March 2020, this couple were seen kissing each other.

Who is Kelsey Owens?

Kelsey Owens is an American model and television personality. She has been modeling for Mother Management and represented by Next in Paris, Milan, and London.

Furthermore, she also starred in the MTV series Siesta Key. Additionally, she is also an Instagram star with over 228k followers.

Kelsey was born on April 4, 1997, in the United States of America. As of 2021, she is 24 years old. Talking about her nationality, she is American and her ethnicity is unknown. She is the daughter of Debbie Owens and has a brother named Colton.

From the beginning of her childhood, she had a keen interest in modeling and also began to learn from a very early age. Moving towards her education, Kelsey attended the University of Mississippi.

Kelsey Owens began her modeling career from a young age. She has been modeling for Mother Management. Moreover, she was also represented by Next in Paris, Milan, and London. Currently, she is a famous model who has featured in various photoshoots of Mother Management.

So far, Kelsey has not received any awards in her career. Although, she has been doing a great job in her field and her works have been also loved by many people around the world.

Being a model and actress, she earns a decent amount of money from her profession. However, her salary is unknown and she has an estimated net worth of $2 million.

As of now, there are no rumors regarding her personal and professional life. Moreover, she has never faced any controversy in her career to date. It seems she has total focus on her work rather than stuck in any controversy.

Kelsey Owens has a height of 5 ft 9 inches and her weight is unknown. Moreover, she has a pair of gorgeous blue eyes and blonde hair. Besides this, there is not any information regarding her other body measurements.